Dalai Lama: Do not politicize my visit to Zenkoji

Nagano, Japan -- Amid speculations on the nature of his first visit to Zenkoji Temple, His Holiness the Dalai Lama asked a group of about 40 journalists who attended a press conference today at Zenkoji not to read too much into a visit that is purely religious. 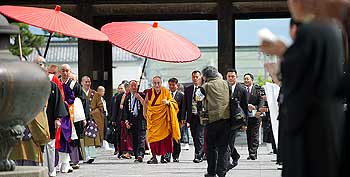 His Holiness said except for his two visits to Washington and Brussels in the past, the rest of his foreign visits including the current one have always been religious. “Many journalists tend to ask me political questions but my answer is don’t politicize my visit,” he said.

Zenkoji attracted intense media attention in 2008 when the temple authorities refused to host the Japan leg of Olympic torch relay. The temple officials had cited brutal crackdown on Tibetan Buddhists as a major reason for snubbing the event. ‘‘Indiscriminate killings were undertaken in Tibet. We were concerned about Buddhists in Tibet who rose up and a subsequent crackdown against them,’’ Shinsho Wakaomi, a Zenkoji official was then quoted as saying in many media reports.

Long before the preliminary events of 2008 Beijing Olympics including the torch relays began, His Holiness said he had time and again appealed to both Tibetans and Chinese people to welcome the global sporting event because “over a billion Chinese took great pride in hosting it.”

He reiterated that Tibetans are not anti-Chinese and that he has deep respect and admiration for the “hardworking and practical” Chinese people who put great efforts in preserving their cultural traditions even when they are scattered all over the world. However, he said the current regime in China that practice censorship and other authoritarian means to conceal the reality create unnecessary misunderstandings between Tibetan and Chinese people.

In this light, he appealed to the Chinese people to use both their ears and eyes to look for unbiased information and to investigate the veracity of government propagandas so they could see the reality. Because many Tibetans and Chinese share the same Mahayana or Nalanda Buddhist tradition that focusses on the essence of reasoning and logic in practicing Buddha’s teachings, His Holiness said investigating the truth behind official propaganda should not be a problem for both the Chinese and the Tibetans.

His Holiness said he has always felt a deep connection and happiness every time he visits religious places in Japan as Tibet share the same Mahayana Buddhist traditions with Japan as well as other Buddhist countries such as Korea, China and Vietnam.

Referring to Chinese president Hu Jintao’s professed aim of creating a harmonious society, His Holiness said harmony cannot come from guns but from the heart because guns instill fear and destroy the trust that is essential to establishing real harmony. He said it is erroneous to call “pro-justice” people such as NGO activists and other Tibet supporters who point out the glaring drawbacks in Chinese government policies as “pro-Tibet” people.

At the press conference, a correspondent from Shinano Mainichi Shimbun newspaper remarked that interest in Tibet among Nagano people has increased tremendously since 2008 and asked if His Holiness had any message for Nagano. His Holiness said his message has always been the same wherever he goes: that of developing universal values of compassion, love and peace. But as Nagano is predominantly Buddhist, he said the local community should work towards promoting religious harmony and developing inner values to help stem the rising cases of depression and suicides common especially among young Japanese. But as a Tibetan, he said it was his duty to express his appreciation to the people of Nagano for their solidarity with the Tibetan cause.