Kamakura expat at one with all Buddhist deities

Kamakura, Japan -- Mark Schumacher's home in Kamakura, Kanagawa Prefecture, requires a journey, both on foot and for the spirit. 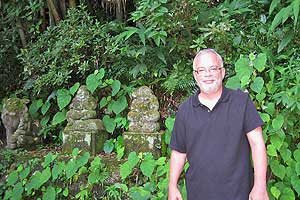 << Mark Schumacher poses in front of century-old statues in the garden of his home in Kamakura, Kanagawa Prefecture.  KRIS KOSAKA

Turn right after the grounds of Tsurugaoka Hachimangu Shrine and follow a gravel path toward a Hayao Miyazaki wonderland of bamboo and sutra-chanting cicadas. Veer right to face an otherworldly stone tunnel, 30 meters long and barely 3 meters high. Sunlight evaporates and the trickle of water on stones is the only sound to mask your riotous heart until you reach the other side and Schumacher welcomes you with a tour of century-old statues in his garden.

Effigies of the seven gods of fortune guard the hillside around the back, while the front sees the eight gods of the zodiac peacefully residing opposite a Shinto torii and statues of guardian foxes and lions.

Schumacher's home presents a microcosm of Japan, a nation celebrating its rich, diverse spiritual history with the ubiquitous religious icons dotting both urban and rural landscapes.

Most of us, foreigners and Japanese alike, may wonder what a particular statue symbolizes, but Schumacher's wonder became his passion, and his passion developed into his livelihood.

His A to Z Online Dictionary of Buddhist Statues, 15 years in the making, garners praise worldwide by religious studies departments, universities, museum curators and art historians as an unending reservoir of information. With descriptions of over 400 deities, 4,000 photos, with over 1,000 pages of information, Schumacher's knowledge site receives from 80,000 to 100,000 visitors each month.

In 2006, he started an online store offering Buddhist statuary. But for Schumacher, it's all about the learning, a process he cheerfully admits will never end.

Schumacher came to Japan in 1984, but his passion for Buddhist statuary didn't emerge until years later.

He grew up in Wanda, Minn., a small town centered within a farming community, with 120 residents and six businesses. Summer meant work on the outlying farms, and Schumacher quickly learned all he wanted to know about agriculture: "I pulled weeds in the corn fields, castrated pigs, butchered chickens, cleaned the cow and pig pens and dreamed of getting out of there."

University offered his first escape. Politically aware from a young age, Schumacher's opposition to the Vietnam War got him interested in Asia, and led him in 1977 to professor Richard Kagan, head of history at Hamline University in Minnesota and a specialist in East Asian studies.

Schumacher credits Kagan for his initial inspiration, and he later worked as an assistant for his mentor while juggling other jobs, including a stint as the technician for Hamline's fledgling computer lab to pay for his undergraduate degree in Asian studies. Part of his program included a year in Taiwan learning Chinese. One year was not enough: "I wanted to stay another year on my own, so I moved down south, lived on a farm, learned how to grow rice. Asia was now on my radar."

After graduating in 1982, Schumacher took a job in New York City, with Taiwan's state-run shipping line. Two colleagues had connections with Japan, and after two years, convinced Schumacher to move with them to Japan. "I had zero interest in Buddhism at that time. I lived and played in Tokyo, a city with such wild, youthful energy that I didn't sleep much."

At the age of 25, with a challenging and exciting job at NEC Corp., marketing a digital fingerprint identification system, Schumacher's curiosity and talent in computers led him quickly to another job, this time in the music industry with Synclavier, a cutting-edge system of musical digitization.

Thus, two strands appeared in Schumacher's early working career: specialization in the nascent field of computer technology alongside a continuing fascination with Asia, specifically Japan. Returning to the U.S. in 1988 to gain his master's in Japanese studies at Johns Hopkins University, Schumacher honed his Chinese and Japanese language skills with the university's School of Advanced International Studies proficiency tests, and accepted a job at the East-West Center as a PC system's manager in Hawaii.

By 1993, the pull back toward Japan proved too strong, and Schumacher encountered Kamakura for the first time when a friend who was living in this small, history-rich city invited him to move in and share costs.

"I fell in love instantly with the city, the ocean, the mountains, the history, the temples, the shrines. The city itself is the reason I got into Buddhist art. As I explored the city, I was amazed by the miraculous stories surrounding the statues; every stone, every tree, every place has a story in Kamakura," he recalls.

"When I moved back to Japan, I quickly found a job as a translator in Tokyo, managing a team of eight people, translating annual reports for a company. It was hard work, but I was able to make a chunk of change, and then find several part-time jobs on the side — translating for other companies, writing stories, creating and designing Web sites."

His designs include the site for Japan Folk Crafts Museum, several Japanese pottery sites, and home-pages devoted to green tea, sake and other traditional crafts.

Schumacher realized the common thread with all his Web sites was Japanese culture; at the same time, he was investigating Kamakura, intrigued by the many "extant and wondrous life-size wooden statues made during the Kamakura Period, from 1185-1333." It was natural to record his findings in a Web site.

"I asked everyone to explain the meaning of various statues, but no one could provide detailed answers . . . I knew I would need to find out myself, and that is how I started down the path as an amateur historian of Buddhist statuary, its deities, and their stories."

Researching in both Chinese and Japanese, Schumacher acknowledges the efforts of two retired businessmen, Takahiro Kondo and Tatsuro Gotoh, who each devoted their retirement life to investigating Kamakura. Schumacher soon learned that his own zodiac sign, the boar, corresponded to the Great Buddha in Kamakura, an effigy of the Amida Buddha. His curiosity intensified, as each finding led to more tangled information.

Gradually, his focus changed: "I ultimately gained a new level of understanding and artistic appreciation, and became interested in a whole new set of issues, not merely who it is, and what does it represent — suddenly, I realized I was in over my head. Japanese religious studies is not just Japanese; it is the study of Hinduism, Taoism, Confucianism, yin yang theories, zodiac cosmology, star worship, mountain asceticism, shamanism, nature cults, animism, all these things got blended together in Japan. Japanese religious studies is excitingly confusing, complex and syncretic."

Schumacher's intellectual curiosity caught fire. "The more I studied, the more it ran away; the more I learned, the more questions I had." All these questions and wonder required more research. Schumacher began memorizing the deities' Sanskrit seed syllables and studying influences from India, China and the Korean Peninsula. His site gained prominence, as everyone from scholars to tattoo artists recognized its value.

Schumacher has worked with a variety of academics, including scholars at the School for Oriental and African Studies at the University of London, art historians at Ohio State University, and researchers for reference works publisher ABC-CLIO, but his site is equally friendly to the lay person: "There is a bit of a boom in American and European interest in Buddhism, with the Western world becoming much more receptive to Buddhism as a philosophy of life."

Schumacher found the perfect abode for his work in Kamakura in 2003 — his current home. When he and his wife began searching for a place to move within the city, the first house they looked at took them through a tunnel into a garden dotted with statues. "It was karma, finding this place right off the bat." The current landowner did not know much about the statues; Schumacher filled in the gaps.

His life's work is to fill in more gaps. Schumacher's newest focus is on Shinto deities: "Ever since the Heian Period, the deities of Buddhism and Shintoism were melded together into a syncretic Buddhist-kami matrix . . . the two moved together as an entity until their forcible separation by the Meiji government in the modern era. I've really started to focus on the hybrid deities in Japan, and it's opened a new door."

Schumacher admits his own door to learning will never close: "I can live until I'm 100, and I will know only the tip of the iceberg."
See www.onmarkproductions.com/html/buddhism.shtml or www.buddhist-artwork.com