DHARAMSHALA, India -- A group of four monks, three from Guru Monastery and one from Jamjor Monastery, raised slogans of “long live His Holiness the Dalai Lama”, “Tibet is independent” and “invite His Holiness the Dalai Lama to Tibet” during their spontaneous peaceful protest in Nyagrong in eastern Tibet’s Kham Province on 8 May 2010, a video received by the Central Tibetan Administration revealed. 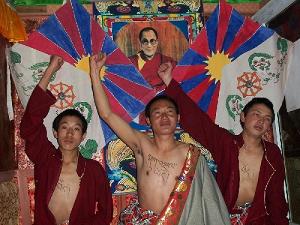 As the Chinese police came to arrest the four monks minutes after they began their protest, three monks escaped on motorbike under the protection of local residents who blocked the police action.

Another monk, who captured the protest on camera, was arrested as his motorbike broke-down.

Since then the whereabouts of the four monks remain unknown.

The whole Nyagrong region as in other parts of Tibet witnessed peaceful protests by the Tibetans in 2008.

The Tibetan residents in lower Nyangrong region expressed their resentment against the government’s forced imposition of “patriotic education”, a campaign to compel Tibetans to denounce His Holiness the Dalai Lama and toe the party line. While the residents of upper part of the region boycotted farming in protest. Many of them were arrested for refusing to conform to the government orders.

A Tibetan named Pema Yeshi has been sentenced to death with a two-year reprieve for allegedly pasting and distributing pamphlets in March 2009.

Later in April, the Tibetan residents of Kyachue Thangkya protested and the Chinese government open fired on the protesters.

In 2009 and 2010, the local residents of Khawa Lungri strongly protested against the government for exploiting mineral resources from a sacred hill.