BEIJING, China -- China rejected pressure from a U.N. human rights panel about more than 300 Tibetan monks and said Thursday that local authorities are "conducting legal education" for the monks to maintain order. 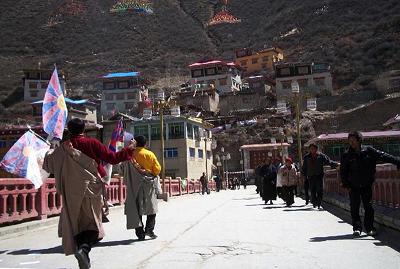 A U.N. human rights panel on Wednesday has askded for full information on the fate and whereabouts of more than 300 Tibetan monks whose whereabouts it said are unknown since they were allegedly arrested in April, though some have reportedly since been released.

Foreign Ministry spokesman Hong Lei said Thursday that there had been "no such thing as enforced disappearance" of the monks.

"The relevant local authorities are conducting legal education for the Kirti monastery monks in order to maintain religious order there," Hong told reporters at a regular briefing Thursday. "We should disregard bias and adopt an objective and fair perspective in looking at this issue."

The Ngaba Kirti monastery in Sichuan province has been the site of tensions between authorities and those advocating independence for Tibet. In March, a 21-year-old monk set himself on fire there in protest against Chinese rule.

The death of 16-year-old Rigzin Phuntsog prompted the Chinese government to enforce legal education at the monastery, including learning the basics of the Chinese constitution, criminal law and regulations on religious affairs.

The U.N. Working Group on Enforced or Involuntary Disappearances said in Geneva that more than 300 monks there were allegedly detained by Chinese security forces April 21. It also urged authorities to investigate and punish those responsible for the alleged disappearances.