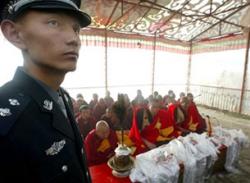 "Look around. They could never find me here," Sheng, 27, says of parents so anxious about their only child's turn to Tibetan Buddhism that they have threatened to kidnap her.

Sheng is far from her home — and from the bars where she used to drink and the ex-boyfriends she says cheated on her. She is here with 2,000 other Han Chinese at the Larung Gar Buddhist Institute in Serthar, Sichuan province, the rain-soaked mountainous region of southwest China.

The province is far from the central government in Beijing and a traditional gateway to Tibet, where Tibetans have practiced Buddhism for centuries — and where, for decades, China's Communist Party has suppressed Buddhists, sometimes brutally.

Holy chants and red-robed devotees spill down hillsides blanketed by red wooden cabins, where monks, nuns and disciples spend hours in meditation. More than 2 miles above sea level, Larung Gar is among the largest Tibetan Buddhist academies in the world, with about 10,000 mostly Tibetan students.

The academy and its rising number of converts from China's dominant ethnic group, the Han Chinese, reflect a remarkable and quiet recovery for Buddhist teachings here. Along with a building boom of new or expanded Buddhist monasteries and teaching facilities in the Ganzi Tibetan autonomous prefecture, it amounts to a reversal of some of the damage from Chairman Mao Zedong's Cultural Revolution.

Mao's efforts to strip China of capitalism and religion while imposing socialism resulted in the destruction of hundreds of Buddhist temples and the deaths of thousands of monks. Just a decade ago, the institute survived a crackdown in which Chinese officials ordered the partial destruction of its buildings.

The late Mao's vision has given way to a more capitalistic and seemingly more tolerant version of communism. But Buddhism's broadening popularity here is stoking tension between Buddhist monks who demand religious freedom and their longtime foe: Communist Party leadership 1,500 miles away.

In Ganzi and neighboring Aba Prefecture, 10 Tibetans — monks, former monks and one nun — have set themselves on fire since March, mostly in recent weeks. At least five have died from their protests for religious liberty, exile groups and state media Xinhua say.

Through acts of defiance - from self-immolations to the destruction of Communist propaganda signs - Ganzi Tibetans are showing resentment toward their Chinese overlords and loyalty to their exiled spiritual leader, the Dalai Lama.

"These self-immolations are caused by being oppressed and denied religious rights," says Dukthen Kyi, a researcher at the Tibetan Center for Human Rights and Democracy in Dharamsala, India.

In Ganzi, many people welcome the growing number of Chinese students but complain their own freedoms will be restricted as long as the Dalai Lama remains in India, his home since 1959.

"I am proud so many Han Chinese come to Serthar to study, as it will help relations between the Han and Tibetan peoples," says Tashi Dengzhu, a yak and sheep herder who lives south of Serthar.

But, "we want the Dalai Lama, our leader, to come home," says Dengzhu, 55. "I know it will be very difficult."
A 'mysterious' religion

Chinese visitors frequently describe Tibetan Buddhism, and its environment, as purer than the Buddhism sporadically practiced by more than 100 million Chinese in cities and towns teeming with temptation. Just how many Han Chinese have converted to Tibetan Buddhism is a sensitive and unanswered question in China.

"Ethnic Han who wish to study Tibetan Buddhism in Tibetan areas are often denied permission for long-term study there," according to a U.S. State Department report on religious freedom, released in September.

"Tibetan Buddhism is more attractive than other religions because many Chinese think it's mysterious," suggests Xu Jun, an analyst at Sichuan University's Center for Tibetan Studies. Eight other Chinese Tibetan scholars declined interview requests on this topic.

One reason: The faith offers psychological comfort amid China's rapid social and economic changes, Xu says. The pursuit of material wealth drives most of China, but businessman Ye Liping has opted out.

"I earned $25,000 a year, and I had a happy family, that's what all the world wants," recalls Ye, 40, from Guangzhou in steamy south China. Two years ago, Ye gave up everything — his marketing job, apartment, car, wife and child — for the monastic hardships of life at Larung Gar.

"I sometimes wonder what my daughter looks like now, but I have no regrets," says Ye, despite winter temperatures of minus 10 degrees.

Han Chinese students have risen from 1,000 when she arrived seven years ago to over 2,000 today, says Yuan Yi, a shaven-headed nun from southeast Fujian province. But the senior Tibetan lama they follow, Khenpo So Dargye, refused to discuss the Chinese student body he heads.

Such caution reflects the academy's troubled past and ongoing vulnerability. Founded in what was an uninhabited Larung valley in 1980, the institute became so popular it attracted a large-scale government assault in 2001. Hundreds of homes were demolished and thousands of residents evicted, according to exile groups.

Don't expect Han converts to soften Beijing's hardline Tibet policy, cautions Thubten Samphel, spokesman for the Tibetan government-in-exile. Their numbers are dwarfed by China's 1.3 billion population, and their motives are apolitical, he says.

"Through Buddhism, Chinese students will come to a better understanding of the values of Tibetan culture, and realize there is no innate sense of anti-Chineseness in Tibetan culture," Samphel says. "We hope and pray that the same attitude and understanding will be shown by the Chinese Communist Party."
Support from Tibetans

As Yuan Yi walks towards Serthar's gold-roofed assembly halls, a Tibetan nun draws close, sneezes on her head, then turns to two giggling friends. Yuan shrugs off the slight.

"Some Tibetans don't like Han, and feel this is their place, not ours, but I just smile," she says. "If there's more love, then everything will be fine."

For some Tibetan monks, desperation justifies breaking a top Buddhist taboo: suicide. In the town of Tawu, the Nyitso monastery has a daring new shrine, laden with small banknotes from townsfolk. The framed photo at its center is Tsewang Norbu, a monk at Nyitso.

On Aug. 15, Norbu, 29, shouted slogans from a bridge, threw pamphlets calling for freedom in Tibet and the Dalai Lama's return, drank gasoline, doused himself and flicked a lighter.

The trigger was the cutting off of water and electricity to the monastery for commemorating the July 6 birthday of the Dalai Lama, says Dukthen Kyi, the human rights researcher.

While private Tibetan money funds many new facilities, wealthy people in China are being tapped by increasingly savvy lamas who tour Han cities for donations.

In both living standards and customs, this harsh region is starkly different from the areas its Han migrants call home. But its Buddhist faith offers universal lessons for Han and Tibetans alike, argues Yuan Yi, the nun.

At a renowned burial site, Yuan reminds two recent Chinese arrivals of the impermanence of life as monks chant scripture for ten bodies, from an infant to very old.

In a centuries-old ritual, the bodies will be dismembered by a rogyapa, or "body-breaker," and the parts scattered to be eaten by birds of prey . Under parental pressure to deliver a grandchild, but opting for nunhood instead, Sheng Zisu looks on aghast.

"You could be the mayor of Beijing or Shanghai, but however rich or important you are, we all end up like that," says Yuan, before hundreds of vultures close in, so that the dead sustain the living.