Tibet, China -- Sky burial is a funerary practice in China's Tibetan regions, where the dead are laid out in a high flat place and ritually cut up, usually by a monk and rogyapas (body-breakers) and then fed to birds of prey, most commonly the Eurasian Griffon vulture. 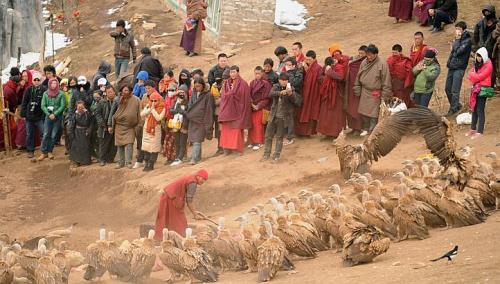 Sky burial dates back thousands of years and probably started because above the treeline wood is too scarce for cremation and the ground too hard for burial.

The practice was banned in China in the 1960s, but was allowed again in the 1980s when China started to reform after the Mao Zedong era.

The photo taken on April 5, 2013 shows vultures (bottom) gathering to eat as a Tibetan Buddhist monk (bottom, centre) prepares dead bodies for a sky burial while tourists and monks (back) watch in Seda, in the western region of China's Sichuan province.