Beijing, China -- China probably has the largest number of Buddhists in the world, yet so little is known about the practice of Buddhism in the world’s most populous country. 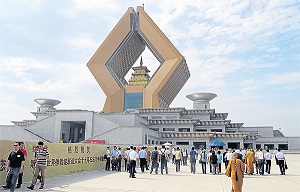 << Namaste Dagoba in the Famen Temple complex. The temple has been redesigned as a place of worship, and features a relic of the Lord Buddha which was unearthed in the Famen pagoda.

That is about to change as China seizes the opportunity to show the world how vigorous it has been in its bid to promote freedom of religion when it hosts the 27th general conference of the World Fellowship of Buddhists between Oct 16 and 19.

It is the first time China has hosted a WFB meeting, which will be held at the city of Baoji in western Shaanxi province. The opening and closing ceremonies will be organised at the Famen Temple, also in Shaanxi.

Delegates from Thailand, a founding member of the WFB, will be able to broaden their horizons, share their experiences with Buddhists from other countries, and gain knowledge and draw inspiration from China to improve Buddhism back home.

With the theme “Buddhism: Public Benefit and Charity”, this year’s WFB conference in China is expected to broaden the appeal of Buddhism to the world. Zhan Lin, deputy secretary-general of the Buddhist Association of China (BAC), said the theme of this year’s meeting had been devised to confirm that Buddhism is a religion of peace and compassion.

“Buddhist teachings offer an approach to ending suffering within ourselves and teach people how to show compassion towards others and help those who are in distress and helpless,” Mr Lin said.

He said Buddhist teachings have been translated into numerous languages — including Pali, Sanskrit, Chinese and Thai, with all sharing the same aim of giving people of various countries a wider opportunity to study and practise Lord Buddha’s words of wisdom that will guide them to inner peace and enlightenment.

Mr Lin said the conference has the full support of the Chinese central and local governments as well as the Chinese people and the Chinese private sector.

The meeting will show the world Chinese people enjoy the freedom to follow, observe, practise and worship any religion or faith, he said.

He said the meeting will let the world know how compassionate Buddhists are, and this will help contribute to the propagation of Buddhism.

Speaking at a press conference at the Great Hall of the People in Beijing on June 30, Phallop Thaiarry, secretary-general of the World Fellowship of Buddhists, thanked the Chinese government and the BAC for putting in a major effort to hold the conference.

“The theme of the meeting is fitting for the propagation of Buddhism and holding charity and humanitarian activities to help victims of natural disasters, regardless of race and religion,” Mr Phallop said.

The opening and closing ceremonies of the meeting will be held at the 1,800-year-old Famen Temple, about 90km west of the city of Baoji.

The ancient temple is a landmark to the arrival of Buddhism in China from India more than 1,800 years ago.

Baoji was said to be among the first cities to embrace Buddhism when the religion was introduced to China, before it spread to and flourished in other parts of the giant country and its neighbours.

The temple has grown in significance, especially after a golden casket carrying a relic of the Lord Buddha — a finger bone — was unearthed from the plinth of an inside pagoda.

Mr Phallop said he believed the meeting will be successful even though China is hosting it for the first time. He expects more than 600 delegates from around the world to attend the meeting.

China is no stranger to international Buddhism. It played a role in founding the WFB in 1950. The WFB’s head office is in Bangkok.

Located in Haidian district of Beijing, Longquan Monastery is another important Buddhist monastery that should serve as a model for Thailand and other countries to follow in terms of peaceful coexistence between monks and laymen.

Built in 951 AD, the monastery experienced rises and falls until 2005 when it was officially reopened for Buddhism services.

It is also the first Buddhist monastery to complete the “Three Jewels” — Buddha, dhamma and the Sangha — since the People’s Republic of China was established. The monastery offers Buddhist education in both Chinese and English.

The temple applies new technology including the social media such as Facebook to spread Buddhist teachings in eight languages such as English, Japanese, French, German, Russian, Spanish, Korean and Thai, allowing teenagers more access to the philosophy.

The monastery is popular with visitors from many countries who spend long holidays studying dhamma and practising meditation. They also volunteer to clean the monastery.

The monastery is self-sufficient in that it grows rice and vegetables organically for its own consumption and for distribution to the poor.

It also offers help, food and relief to victims affected by disasters such as the massive earthquake that hit Sichuan province in 2008. Monks from the monastery also held prayers to soothe the souls of affected people.

Buddhists from all over the world are expecting to draw valuable lessons and inspiration from the meeting as well as the experience of Chinese perspectives on the faith for the betterment of Buddhism in their respective countries.