NEW DELHI, India -- While transgressions by Chinese soldiers in Ladakh in September and the resultant standoff were widely reported, an incursion of another kind shrouded in mystery is said to have taken place in Tibet at around the same time. 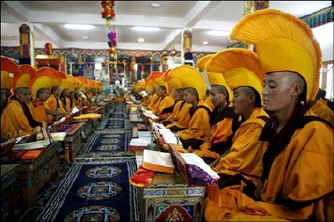 Sketchy details of this are only emerging now from the Chinese-controlled territory.

A dozen monasteries, all more than 800 years old and belonging to the Drukpa Buddhist lineage, were taken over by monks said to have strong financial backing after evicting those already there, leaving the sect's adherents everywhere shaken. The lineage is one of the main Buddhist schools based in the Himalayas.

The takeover of the monasteries coincided with Chinese transgressions in the Chumar and Demchok areas of Ladakh that took place while President Xi Jinping was visiting India, said Jigme Pema Wangchen, the 12th Gyalwang Drukpa, the spiritual head of the sect.

"We are still trying to ascertain if more monasteries have been taken over as these areas in Tibet are remote and communication is poor," Jigme Pema Wangchen told ET. "It took the evicted monks four days to report to me after the incident occurred.

These monks are apolitical, engaged in spiritual work and it is baffling why they were targeted."

Given the history of the region, with the Chinese taking control of Tibet in 1951, the Dalai Lama fleeing to set up a government in exile in Dharamsala and the two countries fighting a war in 1962, anything to do with control of monasteries assumes political significance. India recognised Tibet as an autonomous region under China in 2003.

China expert Professor Srikanth Kondapalli said that the Chinese yuan has been flowing into the monasteries in Tibet with an eye on controlling them since 2011 elections to the Tibet government in exile.

The identity of the monks, many of whom are said to have entered the monasteries under the pretext of wanting to repair and renovate them, is still unknown.

"The need of the hour is to safeguard the identity and culture of the Drukpa Lineage with some forces making attempts to disturb the order," alleged Wangchen, who is based in India.

There are some reports that the members of the Karma Kagyu lineage of Buddhism may be behind the takeover, but there is no confirmation of this.

The lineage has about 300 monasteries in Ladakh alone.

"The Drukpas are present in the Himalayas stretching from the Ladakh region to Tibet and Nepal and all way to Darjeeling in contiguity before modern nation states divided us.

As many as 267 monasteries function from Ladakh and the remaining are in Tibet," Wangchen said.

The monks based in India sought to show where they stood at the time of the recent border incursions.

"When the September standoff occurred between India and China in Chumar and Demchok areas, some of our monks in Ladakh organised protest marches along the Line of Actual Control with the Indian tricolour in hand. They felt Indian territory was intruded upon by foreign forces and decided to organise this," Wangchen said.

The standoff lasted almost all of September after which troops from both sides returned to their positions along the Line of Actual Control. The oddly timed muscle flexing cast a shadow over Xi's visit and Prime Minister Narendra Modi had to raise the issue of repeated transgressions during delegation-level talks in Delhi.

The Department of Posts had issued a commemorative stamp on the Drukpa Buddhists on the occasion of Buddha Purnima this May, perhaps the first recognition accorded by the Indian government to a particular lineage. The 12th Gyalwang Drukpa was born in Himachal Pradesh and his monastery in Ladakh is one of the main centres for the Buddhist lineage.