Guangdong, China -- A Chinese tourist named Cong Chu, 31, offended a group of monks at a Buddhist temple in Foshan, Guangdong Province during a visit when he attempted to donate his iPhone 6 in a collection box. 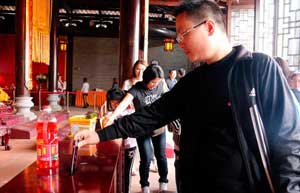 The monks traditionally only accept cash donations and gave the iPhone back to Cong immediately.

Hui Ho, a spokesman for the monks, told Chris Kitching of The Daily Mail, “We informed him that we only accept cash donations which are used for the maintenance of the temple and the everyday expenses of the monks. In any case, they don't have smartphones or know how to use them.”

When asked about the trip to the Buddhist temple and attempting to donate his phone, Cong told Kitching about his intention:

“I was told that if you go there you can get prosperity and good fortune for the coming year and as it was a holiday anyway and my girlfriend was going, I decided to tag along. I didn't realize that we were expected to make an offering of something valuable and only had a few small denomination notes on me. I didn't want to offend anyone, or embarrass my girlfriend, so I decided to donate my iPhone which was worth a good few hundred pounds, as it was brand-new.”

Understanding the subtle differences between cultures can be difficult in an ever-changing world, and Cong unintentionally disrespected the monks with his donation. His willingness to give such a pricey item was a kind gesture, though, as the phone he attempted to donate has a retail value of around $970, according to Kitching.

Unfortunately, Cong’s donation caused a backlash. In Kitching’s report, he claims that Chinese social media lambasted the tourist for making a joke out of a serious religion. One commenter even when as far as to say, “How can anyone be so ignorant, and offer something that represents exactly what monks are campaigning against as they urge people to be more in touch with their spiritual side.”

Regardless of Cong’s intent, the donation clearly rubbed the monks the wrong way and resulted in an embarrassing situation. Next time you’re in a Buddhist temple, learn from Cong’s mistakes and don’t attempt to donate your phone.