Beijing, China -- A Chinese political advisor and Tibetan scholar revealed to the Xinhua News Agency on Monday China’s plan to compile a polylingual dictionary on manuscripts in Buddhism this year. 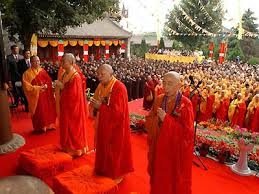 According to National Committee of the Chinese People's Political Consultative Conference member Drongbu Tseringdorje, Chinese scholars need a Sanskrit-Chinese-Tibetan-English dictionary to understand the sutras as well as ancient and high-value records written in palm-leaf that they have collected.

This is because many of the palm-leaf manuscripts which contain records of philosophy, culture, history and sciences used in both the southern and central parts of Asia have been written in Sanskrit while others gathered from Tibet are inscribed in their language.

Those from Tibet, says the report from Xinhua, have been confirmed to have almost 60,000 pages and reportedly date back to more than a millennium ago.

Drongbu, who is also the head of the country's first and only research institute which specializes in palm-leaf manuscripts, also revealed the scholars' preparations toward the second leg of their survey.

He also explained that he would coordinate with scholars from Beijing universities and institutes to create the four-language dictionary needed to further understand the Buddhist manuscripts.

According to studies, Buddhism was first brought to China from India by missionaries and traders who travel along the Silk Road--the road that connects China to European countries--and began blossoming after the fall of the Han Dynasty between 202 B.C. and A.D. 220.

The fall of the Chinese's strict Confucian beliefs led to the blossoming of the Indian religion in the country where it grew into two divisions: Theravada Buddhism and Mahayana Buddhism.

The latter prospered in China and later gave birth to variations such as the Zen Buddhism, Pure Land Buddhism and Tibetan Buddhism, which was also known as Lamaism.

Mahayana Buddhism tackles on the broader part of Buddha's teachings as compared to the Theravada Buddhists' more abstract philosophical questions.