Lhasa, Tibet -- Chinese authorities in Tibet have imposed new restrictions on monasteries in a county in northwestern China’s Qinghai province, intensifying an existing ban on displaying photos of exiled spiritual leader the Dalai Lama, Tibetan sources in the region and in exile said. 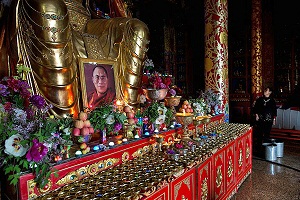 << A portrait of Tibetan spiritual leader the Dalai Lama sits on an alter inside Longwu monastery in Tongren, northwestern China's Qinghai province, May 16, 2013. AFP

The restrictions pertain to Rongwo and other monasteries in Rebgong (in Chinese, Tongren) county, Malho (Huangnan) Tibetan Autonomous Prefecture, in northwestern China’s Qinghai province, a native of Rebgong who lives in exile in Europe said.

“During the month of March this year, the Chinese authorities imposed unprecedented restrictions on the display of the Dalai Lama’s photo in Rebgong’s Rongwo monastery and in other monasteries,” he told RFA’s Tibetan Service.

Authorities issued four restrictions to be implemented at Rongwo monastery, which was founded in the 14th century and is located 124 kilometers (77 miles) from the provincial capital Xining, and other Tibetan Buddhist institutions in the county, he said.

The first mandate requires monasteries to strictly follow the leadership of local management committees in implementing rules and regulations, he said.

Chinese authorities set up the management committees in early 2012 in most Tibetan Buddhist monasteries, placing them under the direct control of government officials who are permanently installed in the lamaseries.

The policy was enacted to ensure that monks and nuns do not participate in activities calling for an independent Tibet or disturb the social order through protests or self-immolations.

“The permanent posting of government or party officials inside monasteries is unprecedented in Tibet, let alone at such a senior level,” Human Rights Watch said in a March 2012 statement after the policy was established.

Under a previous policy, Tibetan monasteries had been administered by so-called democratic management committees whose members were nominated and selected by government and local Communist Party officials, although the body itself was comprised of monks elected by their own communities.

The second requirement specifies that the custodians of shrines and temples should sign off on the management committee instructions to hold them responsible for the policy, the source said.

The third directive mandates that monks in charge of temples and shrines should oversee the safety of all statues and other property and prevent their fellow monks from participating in any activities that could bring disgrace to the monasteries, he said. Such activities include putting up posters against Chinese policy in Tibet and being involved in self-immolation protests.

There have been 144 self-immolations by Tibetans living in China since a wave of fiery protests began in 2009. Most protests feature demands for Tibetan freedom and the return of the 14th Dalai Lama, although a handful of self-immolation protests have occurred over local land or property disputes.

The last directive requires that all statues and photos of the Dalai Lama be removed from shrines and temples, the source said. If anyone is discovered violating this rule, he will be expelled from the monastery and could be handed over to authorities for prosecution.

“Shrines and temples that refuse to follow the instructions could be closed,” he said. “All these restrictions were imposed just this year, but they were planned more than a year ago.”

In monasteries in Rebgong, a local government staff member is assigned to one to two monks to educate them on official rules and policy on regular basis as detailed in a government-issued instruction booklet, he said.

The officials are held responsible for the activities of the monks they instruct in the event that they commit an offense against Chinese rule and policy, a source from inside Tibet said.

The 80-year-old Dalai Lama, whose photos are banned by Chinese authorities in Tibetan areas, fled Tibet into exile in India in 1959 and is reviled by Chinese leaders as a dangerous separatist who seeks to split the formerly self-governing region from Beijing’s rule.

The Dalai Lama, however, says he seeks only “meaningful autonomy” for Tibet as a part of China with protections for the region’s language, religion, and culture.