BEIJING, China -- For centuries, Buddhists seeking enlightenment made the journey to Longquan Monastery, a lonesome temple on a hilltop in the hinterlands of northwest Beijing. Under the ginkgo and cypress trees, they meditated, chanted and pored over ancient texts. 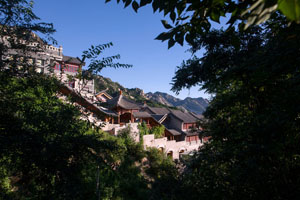 <<  A view of Longquan Monastery, in the hinterlands of Beijing. In success-driven China, many people marvel at the decision of the temple’s monks to leave behind lucrative careers in the tech sector to devote themselves to Buddhist study. Credit Giulia Marchi for The New York Times

Now a new generation has arrived. They wear hoodies, watch television shows like “The Big Bang Theory” and use chat apps to trade mantras. Many, with jobs at some of China’s hottest and most demanding companies, feel burned-out and spiritually adrift, and are looking for change.

“Life in the outside world is chaotic and stressful,” said Sun Shaoxuan, 39, the chief technology officer at an education start-up. “Here, I can be at peace.”

As a spiritual revival sweeps China, Longquan has become a haven for a distinct brand of Buddhism, one that preaches connectivity instead of seclusion and that emphasizes practical advice over deep philosophy.

Monks and volunteers at Longquan Monastery in Beijing perform the morning songjing, or chanting of Buddhist sutras.

The temple is run by what may be some of the most highly educated monks in the world: nuclear physicists, math prodigies and computer programmers who gave up lives steeped in precision to explore the ambiguities of the spiritual realm.

To build a large following, the monks have put their digital prowess to work. They have pioneered a popular series of cartoons based on Buddhist ideas like suffering and reincarnation. (“Having a bad mood can ruin one’s good luck,” a recent cartoon said.) This past spring, they introduced a two-foot-tall robot named Xian’er to field questions from visitors, the temple’s first foray into artificial intelligence.

Traditionalists worry that Longquan’s flashy high-tech tools may have muddled the teachings of the Buddha, the dharma. They say its emphasis on practical topics like resolving family conflict and achieving success neglects more important philosophical questions.

But the leader of the monastery, the Venerable Xuecheng, who dispenses bits of wisdom every day to millions of online followers, has defended his approach, saying that Buddhism can stay relevant only by embracing modern tools. In a computer-dominated world, he has said, it is no longer realistic to expect people to attend daily lectures.

“Buddhism is old and traditional, but it’s also modern,” he said in an interview in March with the state-run news agency Xinhua. “We should use modern methods to spread the wisdom of Buddhism.”

On a recent Sunday morning, I stood outside Longquan’s gates, watching as hundreds of volunteers and tourists ascended to the temple. They bowed to one another and took turns sweeping cracked walkways. Some wandered through the organic vegetable garden, stopping to prop up unruly tomato plants.

The modernity of the temple was inescapable. While it was first built in 957, many of its original structures were demolished by war and, more recently, by the Cultural Revolution, when Chinese Buddhists were persecuted. Only at the turn of the century was the temple salvaged and rebuilt by a Buddhist businesswoman, Cai Qun. It reopened in 2005, and it is now equipped with fingerprint scanners, webcams and iPads for studying sutras, or Buddhist texts.

The state-run news media speaks of the temple in almost mythical terms. In success-driven China, many people marvel at the decision of the temple’s monks to leave behind lucrative careers in the tech sector to devote themselves to Buddhist study, rising at 3:55 a.m. each day for morning prayers.

Longquan has become a favorite showpiece for the ruling Communist Party, which officially promotes atheism but has led a push in recent years to revive ancient cultural traditions. In addition to leading Longquan, the Venerable Xuecheng is the president of the Buddhist Association of China, a party-controlled supervisory organ. The temple displays the writings of President Xi Jinping, and long-term residents must submit information about their patriotism and political views.

In a kind of soft-power spiritual push, the Venerable Xuecheng has sought to turn the teachings of the monastery into a global export, translating his writings into more than a dozen languages. In July, he helped open a temple in Botswana for Chinese expatriates.

Longquan’s proximity to several of Beijing’s top universities and the city’s main science and technology hubs has made it popular among young people. Many of them are searching for deeper meaning in a society rife with materialism. Others seek an escape from grueling schedules, and tips on relaxation.

The temple is renowned in start-up circles, in part because of a widely circulated rumor involving Zhang Xiaolong, one of the inventors of WeChat, a popular messaging app. News articles have claimed that Mr. Zhang, having hit a stumbling block, attended a retreat at the temple, after which he gained inspiration for WeChat. (Mr. Zhang, through a spokesman, denied the reports.)

Today, young entrepreneurs make the pilgrimage to Longquan in hopes of creative epiphanies. They work at some of China’s most prominent technology companies, including JD.com, an e-commerce giant, and Xiaomi, a smartphone maker.

“Some of the people who come here may not actually be incredibly interested or believe in Buddhism,” said Rax Xie, a software developer. “But they will have a certain connection and receptiveness to the thought and culture behind Buddhism.”

On Sunday mornings, Mr. Sun, the technology entrepreneur, makes his way from his suburban apartment to Longquan. He slips on a maroon robe and begins to chant.

Mr. Sun was once a skeptic of religion. But after a spiritual awakening last year, he said he came to embrace Buddhism, eschewing meat and alcohol and persuading his wife to join him on his spiritual journey.

I met Mr. Sun at a chanting ceremony one Sunday at Longquan. The meditation hall was covered in pillows decorated with lotus flowers; a large, gleaming Buddha statue rose from the front.

A wiry man with soft, dark eyes, he sat in the first row of worshipers, a bell in his hand, and wore a golden sash reading, “Thanks to those who taught me salvation.”

After the ceremony, he told me about his transformation. As he saw it, he was once self-centered and angry, prone to barking orders at his family and co-workers. While his mother was a Buddhist, he saw the religion as “just a story.”

Then, in the fall, he attended a three-day retreat at Longquan intended for information technology workers. He was forced to give up his cellphone and passed the time by meditating, listening to lectures and working in the garden. Almost immediately, he said, his mind felt cleaner and lighter.

Mr. Sun and his wife now attend services nearly every week. In the afternoons, he performs maintenance on Longquan’s websites and helps organize workshops on back-end programming.

He said he had come to see the temple as a “small utopia, free of conflict,” in a society that could sometimes feel riddled with deception.

“When you go to the mountain, you don’t need to think: ‘Who will trick me? Who will harass me? Who will think badly of me?’” he said. “Once you have a sense of security and trust, then you will want to open up, help others and explore your beliefs.”
TOP