Famous lamasery in northwest China to have price hike 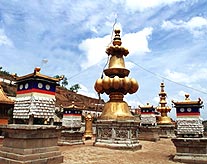 The price hike has been approved by the provincial development and reform commission, a source from the commission said.

A public hearing was also organized about the price adjustment late last year.

Active-duty servicemen, disabled military service people, retirees from the military, as well as children before school age will be allowed to visit the lamasery free of charge, while half-off discounts will be given to students, senior citizens and the handicapped, an official from the commission said.

The Gumbum Lamasery, also called "Ta'er Temple" in Chinese, is located in Huangzhong County of Qinghai Province or 20 km away from Xining, the provincial capital.

The lama temple is referred to by experts as "the imperial palace of the northwest " because of the axis running directly through its mid-section, dividing the temple into two symmetrical parts, just like the imperial palace in Beijing. The temple has remained intact, but centuries of weathering and the lack of maintenance have damaged the buildings, murals and cultural relics inside.