BEIJING, China -- Ming Zhaung is never without a place to sleep, food to eat, or ink for his brush. The Zen master of the Bailin Temple in Hebei Province is constantly cared for by his devotees - now more than 1,000 students, most of whom started attending his lectures last summer. 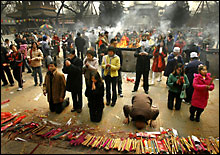 << SCENT OF RELIGIOUS FREEDOM: Chinese Buddhists light incense at the Buddhist Lama Temple in Beijing during a festival in February. Religion, particularly Buddhism, has seen a resurgence.
DAVID GUTTENFELDER/AP

"I am always traveling to spread the Dharma," says Mr. Ming, who makes a circuit of homes and meeting places throughout China. "Everything is provided by my students."

As China becomes more wealthy and worldly, it's also experiencing a growing interest in spirituality. Chinese are emerging with "more time and freedom to think," says Yuan Ci, a monk who works with the Buddhist Association of China in Beijing. In doing so, they are helping to revive China's venerable religions, like Buddhism.

In urban areas, China's new Buddhists are young, college-educated, and upwardly mobile. They are looking not only for purpose in their lives, analysts say, but for a way to cope with the pressures of modernization and high expectations.

Spirituality is "the peach orchard outside the world," says Gyan Giri, director of the Mountain Yoga retreat center in Beijing, citing a Chinese saying. "It's finding an Eden or a utopia where people can lead a better life."

China's market economy, Yang Fenggang, a sociologist at Purdue University in West Lafayette, Ind., wrote in an academic paper, is "accompanied by widespread moral corruption, which prompts many individuals to seek a theodicy, or a religious worldview, to put the seemingly chaotic universe into order."

With roughly 100 million followers, Buddhism is the largest religion in China, according to government statistics. It also is the most favored. Senior officials have been known to seek Buddhist masters for guidance - and many turn a blind eye when Buddhist masters disregard laws that prohibit teaching in private settings, something that can result in punishment for Christian leaders of "home churches."

"Exceptions to the regulations are often made in regard to Buddhism," says Mr. Yang. "You can buy Buddhist scriptures at public bookstores, but the Christian Bible is not allowed to be sold. Of course, if you ask for it in sincerity, some bookstore manager might find a copy for you under a hidden cabinet."

Still, other religions are gaining followers as well. Yoga is attracting more practitioners, ironically because of its image as a fashionable Western trend. And Protestant Christianity is the fastest growing religion in China, according to Yang, who notes an increase of young converts in recent years. Academics estimate that there are 50 to 80 million Protestants in China. Often, Chinese will move back and forth between religions, according to their needs.

"The Chinese have traditionally been religious opportunists," said Gene Cooper, a professor in anthropology at the University of Southern California. "But if you've had success getting your prayers answered at the Daoist Temple, then that's the one you go back to."

Because of the leeway given to Buddhism, its revival has been more evident. This April, for example, the Buddhist Association of China, the official supervisory organ, will launch the first World Buddhist Forum to "find out how Buddhists can take action to make a peaceful world," says Yuan Ci.

"Unlike Christianity and Falun Gong, which authorities view as 'alien' and intrusive, the government has adopted a fairly loose reaction to the reemergence of local 'popular' religion, which is experiencing a renaissance," says Professor Cooper.

To reach his followers, Ming ignores the rules on home teaching. On Sundays, his students pack a Beijing apartment, sitting cross-legged on the floor to listen to lectures on Zen philosophy. "In Buddhism, there is destiny," says Fang Fang of how she became one of Ming Zhuang's students. "One day in 2004, I realized that I must find a teacher in Buddhism. So I prayed for it. Last year, I met my teacher."

Amelie Yu met her guru in Qinghai Province, and says Buddhism saved her from suicide. In despair, she had traveled to Qinghai and made a vow to become a Buddhist just so she could visit Tibetan temples for free. She then planned to kill herself. But while visiting the Za Er Temple in Qinghai, she had an awakening.

"At first I was impure," she said of her motive for becoming a Buddhist. "But I became pure. You can't lie to yourself. Now I just want to be a good person and do something for other people. I want to try to have a better life."

That desire, along with China's new wealth, means more private donations at Buddhist temples from those looking for "spiritual promotion," says Yuan Ci.

According to the Buddhist Association of China, donations have helped repair 24,000 old temples that were destroyed during Mao's Cultural Revolution of 1966-76, including thousands in Tibet, China's most vibrant center of Buddhism. In 1995, there were 13,000 Buddhist temples, according to official statistics.

In Shanghai, 30 Buddhist temples have been renovated in the last five years, mostly from private donations. Between 1993 and 2003, the Bailin Temple doubled in size due to financial support from businesspeople. One of Mountain Yoga's retreat centers outside of Beijing is a 500-year-old Ming Dynasty Temple that has recently been restored by donations from a medical company. Many of the temples are not yet active and have been restored largely for their cultural significance.

Money for China's Buddhist revival also flows in from abroad, especially from Hong Kong and Taiwan. In Taiwan, Buddhist masters have been using donations to restore temples in their hometowns on the mainland, which they were forced to flee when the Communist Party came to power in 1949.

Some charge that the influence from Taiwan promotes "religious business enterprises," according to Chiang Tsan-teng, a professor of religious studies at Taiwan's National Tsing-Hua University. People claiming to be Tibetan lamas exploit the popularity of Buddhism, for example, by selling bogus statues, prayer beads and other religious artifacts at temples. Chiang calls the trend "department store Buddhism," but adds that official control over religious activity has stemmed profiteering in the mainland.

However, new wealth in many respects has made the lifestyles of monks more secular. They carry top of the line cell-phones, drive motor scooters, and in more extreme cases, lead the lifestyle normally reserved for the wealthy.

The major exception to a more liberal environment for Buddhists is Tibet, where the religion has been subject to systematic repression since the Dalai Lama fled over the Himalayas into exile in 1959. Among other things, the government enforces "patriotic education" in Tibetan temples, which requires monks to reject Tibetan independence and the Dalai Lama, who the government calls a "splittist."

However, thousands of Tibetans and about 150 mainland Chinese were allowed to attend teachings in Dharamsala, India, by the Dalai Lama in January. It's believed that Chinese authorities eased restrictions ahead of secret talks with envoys of the Dalai Lama, most recently in February.

Yuan Ci believes the government is starting to recognize the role religion could play in striving to achieve a "harmonious society" - the ideal of an egalitarian and balanced society that China's leaders espouse. "Religion can take a part in making society peaceful," he says.