Lhasa, Tibet (China) -- A Tibetan monk and teacher of traditional monastic dance (Cham) from the Tibetan area of Amdo has been sentenced to four years in prison after he gave talks about Tibetan culture and history. Gendun, who is in his thirties, was detained in February 2005, with more than 20 monks, students and teachers also detained in connection with his case. 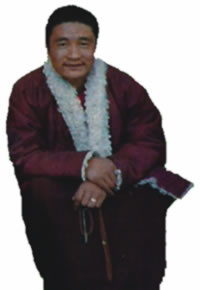 While the other Tibetans detained at the same time appear to have been released soon afterwards, Gendun was tried and sentenced in January (2006). The formal charges are not yet known, but according to reports from the area, Gendun's imprisonment appears to be linked to his popularity and influence in the local community as a speaker on issues relating to the importance of Tibetan culture.

A Tibetan from the area who knows Gendun told ICT: "The monks at his gompa [monastery] found out that he had been arrested last year when someone from his family arrived to request prayers for him. Gendun is a very educated monk, and very passionate in his views. He is a good teacher, and always talked about the importance of Buddhist practice."

Gendun was arrested last year, nearly three months after he held a meeting to speak about Tibetan culture and history at a teacher training college in Tsolho (Chinese: Hainan) Tibetan Autonomous Prefecture, Qinghai province. His family did not know of his whereabouts for some time, and he was reportedly held for the first year in custody in different detention centers in the area. His current whereabouts is unknown, and there are concerns for his safety. At least one monk who was detained after Gendun’s arrest was reportedly beaten severely in custody before being released.

Gendun, who is from Gongma township in Chabcha (Chinese: Gonghe) county in Tsolho (Chinese: Hainan) Tibetan Autonomous Prefecture in Qinghai, had been a Cham dance teacher at Yulung monastery in Tsigorthang (Xinghai) county since the late 1990s. He had studied Buddhist doctrine and philosophy, including traditional Tibetan medicine, at the Larung Gar religious institute in Serthar, Sichuan (the Tibetan area of Kham).

Although ICT could not confirm information about Gendun's whereabouts, reports indicated that he may currently be held in a 'reform through labor' facility (laogai) west of Xining, Qinghai. 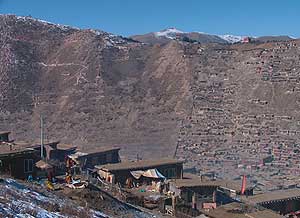 Between 1996 and 1998, Gendun studied at the Larung Gar religious institute in Serthar, Sichuan (the Tibetan area of Kham). The institute, pictured in winter 2006, was founded in 1980 to revive Tibetan Buddhist scholarship and practice by the late Khenpo Jigme Phuntsog, and housed the largest concentration of monks and nuns, including some Chinese Buddhists, in Tibetan areas.

The photo, taken in winter 2006, depicts settlements of monks and nuns and an area of empty land where more than a thousand dwellings of nuns and monks were demolished by Chinese work teams in 2001 and hundreds of nuns and monks expelled. No new settlements have been allowed to be built on the site where they were destroyed. Today, studies and religious practice continue at Serthar with a smaller population of monks and nuns and in the absence of the institute's founder and primary teacher, Khenpo Jigme Phuntsog, who died in January 2004.