Hangzhou, China -- China’s atheist communist rulers used the opportunity of the World Buddhist Forum to introduce the 11th Panchen Lama to the world stage today, but fellow delegates shunned him. 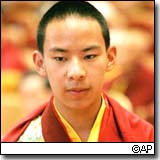 Beijing anointed Gyaltsen Norbu as Tibet’s second-most important religious figure in 1995, rejecting spiritual leader, the Dalai Lama’s nominee, who has disappeared and is believed to be under house arrest. However, many Tibetans and westerners dismiss China’s choice as a sham.

Gyaltsen Norbu sat alongside Buddhist leaders attending the World Buddhist Forum during an audience with Jia Qinglin, ranked fourth in the Communist Party hierarchy, at a hotel in the scenic city of Hangzhou in China's east coast.

The visiting dignitaries had filed into a room and were introduced to Jia and other Communist leaders, but no one walked over to shake hands with Gyaltsen Norbu who sat quietly and appeared uneasy. Fellow Buddhists made no attempt to publicly greet the Panchen Lama during the few minutes when reporters were allowed in the room with them.

The World Buddhist Forum — China's first international religious meeting since the communists swept to power in 1949 — will begin in Hangzhou tomorrow and wind up in nearby Zhoushan on Sunday.

Organisers timed the forum to coincide with the Christian festival of Easter, sources said, apparently to send a message of China's greater religious tolerance to church-going President George W. Bush ahead of his summit with Chinese President Hu Jintao later this month.