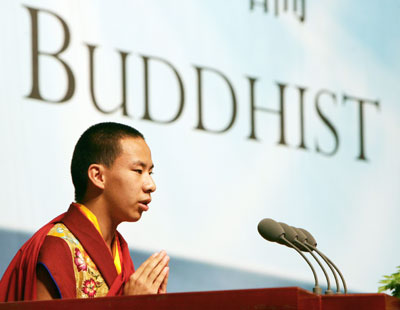 Chinese leaders opened the forum in the eastern city of Hangzhou with a pledge to respect religious freedom and seeking to ease fears the rise of the world‘s most populous nation would be a threat to the world.

Gyaltsen Norbu, appointed in 1995 as the Himalayan region‘s second most important religious figure after Beijing rejected the Dalai Lama‘s nominee, shared the stage at an auditorium with eight Buddhist leaders from South Korea , Taiwan and Sri Lanka, taking the middle seat.

"Chinese society provides a favorable environment for Buddhist belief," the 16-year-old told the forum which winds up in nearby Zhoushan on Sunday.

Wearing a yellow and maroon robe, he delivered his terse speech in Tibetan which was interrupted twice by applause from more than 1,000 delegates from 34 countries.

The Dalai Lama‘s nominee is believed to have been under house arrest since 1995, when he was six years old. International human rights watchdogs call him the world‘s youngest political prisoner.

Gyaltsen Norbu made his debut on the world stage on Wednesday, sitting alongside about 50 Buddhist leaders during an audience at a hotel with Jia Qinglin, ranked fourth in the Communist Party hierarchy. But the other delegates ignored him.

Two other top lamas of Tibetan Buddhism were conspicuously absent from the forum.

The Dalai Lama, branded by Beijing as a "splittist," has lived in exile in India since 1959 when he fled his homeland after an abortive uprising. A 23-year-old backed by the Dalai Lama as the Karmapa Lama, ranked third, fled to India in 1999.

Liu Yandong, number two in the top advisory body to parliament and the most senior Chinese at the forum, sought to play down fears China‘s rise would be a threat to the world.

"Internal harmony will definitely lead to external peace," he said, days before a summit between Chinese President Hu Jintao and his deeply religious U.S. counterpart, George W. Bush, in Washington.

"We will, as always, comprehensively carry out policies on freedom of religious worship and support religion to make due contributions to promote a harmonious society," Xi said.

A photo exhibition is being held at the forum venue, but there were no pictures of either the Dalai Lama or from the chaotic 1966-76 Cultural Revolution when monasteries were closed, statues smashed, religious texts burned, and monks and nuns forced to return to secular life.

China has since sought to control but not stifle religion in a society where an ideological vacuum has spawned corruption and eroded ethics in the post-Mao era.

But in the face of rising unrest, China has no qualms about crushing any challenge to its rule, banning the Falun Gong spiritual movement as an evil cult in 1999.

China is generally less fearful of Buddhism, with its home-grown roots, than other religions, even though many Tibetan monks and nuns have been jailed for their loyalty to the Dalai Lama, whom Beijing accuses of pushing for independence.