HANGZHOU, China -- A Japanese monk said here Friday that most Japanese are suspicious of their Prime Minister Junichiro Koizumi's visits to the Yasukuni shrine that honors some World War II criminals. 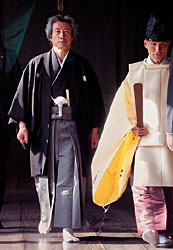 "Koizumi claims his visit to the shrine is an 'issue of his inner world', but why doesn't he pay homage to other shrines and temples?" Uchiyama Gyoho, abbot of the Tokyo-based temple Ichijyoin Nichirensyu, told Xinhua at the First World Buddhist Forum.

The forum held in this scenic city which is known as "Paradise on Earth" runs from April 13-16.

There are many famous temples in Japan that boast history over 1,000 years while the Yasukuni shrine is only 150 years old.

Japan's constitution stipulates that politics and religion should be separated so Koizumi's visits are in violation of laws, Uchiyama said.

Japanese Buddhists regard China as the "homeland of Buddhism" as the religion was first introduced to Japan from China and the forum offers a good opportunity for exchanges between Buddhists from the two countries, he said.

"Japanese Buddhists have been working for Japanese-Chinese friendship and we'll stick to it."

Koizumi has visited the Yasukuni shrine several times since he took office in 2001, which honors 2.5 million war dead and 14 Class-A war criminals from World War II.