GUANGZHOU, China -- As part of the celebrations for the Year of China-India Friendship, two Buddhist monks from the Chinese mainland and Taiwan Mingxian and Huizai started a journey to India yesterday to follow the footsteps of Xuanzang, a famous Buddhist predecessor. 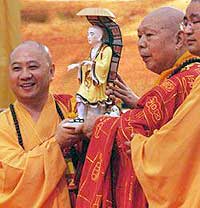 A grand ceremony was held yesterday to see off the monks from Guangzhou to Xi'an, which is the starting point of their journey.

Over the next four months they will follow in the footsteps of Xuanzang, a Buddhist pilgrim who went to India some 1,300 years ago to obtain Buddhist scriptures and study. He returned to China 17 years later.

They will pass through Shaanxi, Gansu and Xinjiang in China before crossing Pakistan and Nepal on their way to Nalanda, the once famous temple of Buddhist learning in India.

Xuanzang travelled from the city of Chang'an, which is now Xi'an in Northwest China's Shaanxi Province, to India to obtain Buddhist scriptures and study.

But unlike Xuanzang, his successors are not looking for Buddhist scriptures.

"The journey aims to better promote communication and cultural exchange between China and India," said the venerable Shenghui, administrative vice-president of the China Buddhist Association, at yesterday's ceremony.

The project, which is co-organized by the China Buddhist Association, the Chinese People's Association for Friendship and the China Xuanzang Research Centre, is also to promote Xuanzang's enduring spirit in promoting Buddhism, he said.

"Xuanzang kept searching for the real Buddhist scriptures by travelling to India and translated the texts into Chinese," he said.

"Today, his enduring spirit should still be respected and better promoted and his successors' journey will help give the public a better understanding of Buddhism."

A total of 108 monks from the Chinese mainland, Taiwan, Hong Kong and Macao and four major actors in the TV series "Journey to the West," which is based on Xuanzang's story, also attended yesterday's ceremony.