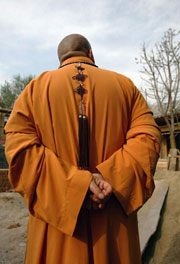 Master Shengguang, an administrator Buddhist was forced to leave the temple because he performed ceremonies to "expiate the sins of the dead" this year for the victims of Tiananmen Massacre 17 years ago. Master Shengguang was a former Tiananmen Democratic Students Movement organizer in 1989.

The HRIC news stated on August 22 that Yichun Municipal Religious Affairs Bureau Director Yang Xu took 60 policemen to the temple and forced the temple's Abbot, 88-year-old Master Jiequan to accompany them for an urgent meeting with Master Shengguan.

At the meeting, Yang Xu reportedly forced Abbot Jiequan to read a formal written notice condemning Master Shengguan for improper relationships with three of the temple's female believers; no evidence was provided for this accusation. Another false accusation came from the Chairman of the Buddhist Association of China, Master Yicheng, stating that Master Shengguan had violated precept (monk's rules) and would be expelled from the temple.

Abbot Jiequan refused to accept the notice and then 30 plainclothes policemen forced the Abbot into a police vehicle after the meeting. Master Shengguan was also taken away later.

Attorney Zhou said, "The entire procedure of this expelling was directly planned by the authorities. The authority forced the religious leaders to accept authority arranged personnel appointment. Expelling a monk from a temple with so many police, is like using cannon to hit a mosquito, one never heard of using so many policemen for a sex scandal. I believe there is no doubt about Master Shengguan innocence, and no need to defend him, because no one at Huacheng Temple would believe the authority's reason trumped up case to expel him. This is simply a frame-up."

HRIC spokesperson Feng Congde said that, "besides conducting rituals for Tiananmen Massacre victims, Master Shengguang believed in a transparent financial policy inside the Temple. This annoyed the corrupt system in the local authority who then could not embezzle money from the temple. This honesty from Master Shengguang had touched the nerve of all those with vested interests in corruption. A corrupt Chinese idiom is "One who has a mind to beat his dog will easily find his stick."

Master Shengguan thought without any evidence or investigation, it would be an illegal act for Master Yicheng, to sign the notice accusing him of having an affair with three female believers. He plans to protest the decision to the end, and is not excluding the use of legal means to solve this problem.

Master Shengguan said, "Because of Chinese communist regime, most religions in China today are not free. The Religious Affairs Bureau in the Ministry of United Frontline controls the temples, and does not want the temple to have a transparent financial system. Since I came to the temple, I have spent a lot effort to make the finance transparent. The Religious Affairs Bureau could embezzle money from the Temple in the past, but they can not do it now. Therefore they want me go."

Master Shengguan also disclosed that, the Religious Affair Bureau in Yichun city planned to expel him many times in the past, but could not find his any true fault with him. Then on June 4, 2006, he led believers to conduct a spiritual ritual for the Tiananmen Massacre victims. After learning about that, the local religion authority started to harass him, and then fabricated some charges against him. One of the charges was that he had sympathized with and supported the Falun Gong group. In 2004, Master Shengguang, acting as a citizen, had filed a lawsuit representative for Falun Gong practitioners.

Master Shengguan is now in Shenzhen city, Guangdong province. He says his next step is to unveil to the world the true face of the Buddhist Association of China – a Chinese Communist Party (CCP) regime's tool to suppress Buddhists. At the same time he wants to protest for his rights through legal channels.

Buddhism is one of the five religions so called approved by the Chinese communist regime. According to the China official statistical data, among the organized religious followers, the Buddhist population is the biggest. There are more than one hundred million Buddhists, roughly eight percent of the population in China, "managed" by the Buddhist Association of China that is controlled by the communist regime.