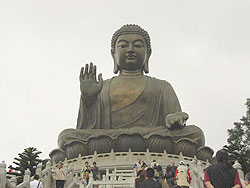 The launch of Ngong Ping 360, originally set for June 24, had been postponed indefinitely while operators investigated the cause of a breakdown that left 500 visitors hanging in mid-air in motionless cabins for two hours.

"In addition to the spectacular cable car ride with panoramic views of the North Lantau Country Park and Tung Chung Bay, our guests can be assured that the cableway and its supporting systems will offer a reliable, comfortable and fun tourism experience," he said in a statement.

The cable car, which took over two years to build, will glide 5,7km over hills to a culturally-themed village near Hong Kong's Big Buddha statue.