Tibet, China -- The Chinese authorities have issued a rare statement acknowledging the 'removal' of a giant gold and copper plated statue of Guru Rinpoche (Padmasambhava) donated by Chinese Buddhists to Samye monastery in Tibet and demolished by Chinese People's Armed Police in mid-May. 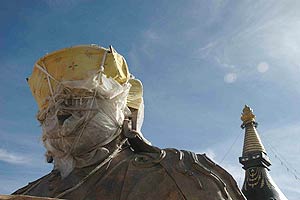 There has been a trend towards the tightening of control over religion in Tibet, and this demolition is an example of the aggressive enforcement of wide-ranging new regulatory measures introduced in the Tibet Autonomous Region (TAR) in January 2007, and in China in 2005.

The 30-feet high statue at Samye, Tibet's oldest monastery, was apparently funded by two Chinese devotees from Guangzhou in the southern Chinese province of Guangdong. There is an increasing interest in Tibetan Buddhism among Chinese people, with many now following Tibetan Buddhist teachers and going on pilgrimage in Tibet. Local Tibetan devotees were frightened to disclose information about the incident after People's Armed Police troops were deployed around the monastic compound during the demolition process in Lhoka prefecture (Chinese: Shannan), the TAR.

Lodi Gyaltsen Gyari, Special Envoy of His Holiness the Dalai Lama, said: "This divisive and sacrilegious act by an atheist state has caused deep anguish among Tibetans in the region. It is particularly sad that the authorities destroyed the statue of a Buddhist leader who is revered by both Tibetans and Chinese. The Buddha Dharma has the potential to bring more Tibetan and Chinese people together, and so the demolition of the Guru Rinpoche statue at Samye is nothing less than an act of splittism."

New regulatory measures adopted in China from March 1, 2005, outlaw construction of "large-size outdoor religious statues" by individuals or organizations "other than religious bodies, monasteries, temples, mosques and churches." (Article 24). Article 13 of the new religious measures adopted by the TAR from January states that "Organisations and individuals not belonging to religious organizations or places of religious activity may not erect or construct large-scale outdoor religious statues or mani lhakhang [prayer wheel temple]."

Images on ICT's website at taken by a photographer who wishes to remain anonymous show the statue nearing completion in February before its demolition three months later. The official Chinese report, issued on June 9 by the Democratic Management Committee of Samye monastery and published by the China Tibet Information Center, said that the construction of the statue "disobeyed the Law of the People's Republic of China on Protection of Cultural Relics and the Notice of Illegally Building Open Statue of Buddha....Samye Monastery then self moved the open-air statue forwardly [sic]" (the full statement is at: http://info.tibet.cn/en/news/tin/t20070609_250524.htm).

Guru Rinpoche ('precious master'), or Padmasambhava, is accredited with establishing Buddhism in Tibet in the 8th century, and with laying the foundation for Samye monastery. Worship of Padmasambhava is of particular spiritual and historical significance to Tibetans, who believe that worshipping him can remove obstacles to the practice of Tibetan Buddhism, as well as preservation of Tibet's unique Buddhist culture. Samye monastery, in Dranang county, is recognized as the first monastery in Tibet, the place where monks were ordained and trained for the first time.

Even if Samye monastery had arranged for the construction of the Guru Rinpoche statue, the monastery would still have had to apply to higher Communist authorities for permission from the State Council (the State Administration of Religious Affairs), after the Lhoka prefecture and Religious Affairs Bureaus of the TAR regional governments had both granted permission. The scope of the new regulatory measures, as well as hostile statements against the Dalai Lama made by leaders in the TAR, indicate a stepped up commitment in recent months to strengthen the Chinese Communist Party's control over religion.

A Tibetan in the Samye area told the Tibetan Center for Human Rights and Democracy: "Tibetans in Lhoka, particularly in Dranang country, did not dare to challenge the officials openly but deep inside their heart, people fear and worry that the demolition of Guru Rinpoche's statue and transportation of its rubble bear a resemblance to the dark era of the Cultural Revolution." (TCHRD report, June 4).

Implementation of state religious policy has been particularly harsh in Tibet because of the close link between religion and Tibetan identity and nationalism. As the Dalai Lama and Tibetan Buddhism gain in popularity and influence worldwide - including among many Chinese - Beijing has entrenched its position on religion, introducing new measures in an attempt to curb the Dalai Lama's authority and control religious practice.