NEW DELHI, India -- In an extraordinary move that has long-term implications particularly for India, China has banned the reincarnation of living Buddhas without state permission. 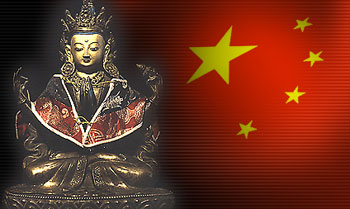 In an order by the state administration of religious affairs, which comes into effect from September 1, China has said Buddhas cannot be reincarnated outside China. Instead, they would have to take permission from the state, which would oversee the selection of the "soul-boy" (or the reincarnated Buddha).

The law also stipulates that reincarnations of living Buddhas cannot be influenced by persons or organisations outside China. This means that the Dalai Lama will be barred from the process.

What are the implications of this amazing law? It's easy enough to determine that the Dalai Lama is the most immediate target. The 72-year-old spiritual leader, who Buddhists believe is the reincarnation of Avalokiteswara, has lived for almost half a century outside Tibet in India.

To that extent, this has an immediate impact. China is clearly looking beyond Dalai Lama. The third Dalai Lama was born in Mongolia and the present Dalai Lama declared in 2002 that if Tibet was not free when he died, he would be reincarnated in a free country elsewhere. The Chinese government wants to pre-empt that.

One of India's greatest political and diplomatic leverage with China is the Dalai Lama. As the home of Buddhism, India's continued shelter to the highest spiritual leader for the world's Buddhists and his followers has attracted global attention, just as China has shown itself otherwise.

The next Dalai Lama, according to analysts here, could even be chosen by the Dalai Lama himself. But it's now clear China will stymie that and create an uncertain situation with a series of Beijing-appointed lamas who will be pitted against the Tibetans' choice. It will also effectively rob India of that leverage.

The logical extrapolation is that China will harden its stand on the boundary talks with India. At the heart of the impasse between India and China is Arunachal, which China wants because of the Tawang monastery where the 6th Dalai Lama is supposed to have been born. A line in the new Buddhism "measure" makes China's intentions clear.