BEIJING, China --  The Chinese government accused the Dalai Lama of disrespecting Buddhist traditions for saying he may name his successor before he died. 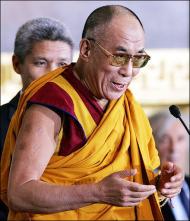 "The reincarnation of the living Buddha is a unique way of succession of Tibetan Buddhism and follows relatively complete religious rituals and historical conventions," foreign ministry spokesman Liu Jianchao said.

Jianchao furthered his statement by stressing respect for the reincarnation process.

This conflict between Tibet and China adds to the already-growing tension between the two regions.

The Dalai Lama, who has been seen as a thorn on China's side for his separatist ideals, has for years fought for the autonomy of Tibet, which China considers a colony, much to the protests of Tibetans.

In turn, Tibet has accused China of merely awaiting the death of the spiritual leader, with them seeing it as an opportunity to install an appointed successor, further tightening their grip on Tibet.