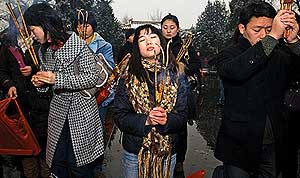 << On the first day of every lunar month, Buddhists crowd the Yonghe Temple to burn incense. Mark Leong / Redux

Four Tibetan art works eventually fetched $3.4 million and, at a follow-up auction eight days later, 87 pieces of Buddhist art netted $10.4 million. For the gallery's proprietor, a half-Tibetan, half-Chinese entrepreneur named Yi Xi Ping Cuo, 35, the brisk business was another testament to the popularity of Buddhism in China. "Every year there are millions more Buddhists," says Yi. "Of course they want to put a Buddhist statue in their homes to make their hearts peaceful."

Buddhism is booming—quite a paradox given the Communist Party's official atheism and its troubled relationship with the Dalai Lama. The faith's growing popularity reflects a yearning for meaning among China's yuppies, who increasingly are attracted to Buddhism's rejection of materialism and emphasis on the transitory nature of life.

"They have a BMW and a house in the countryside," says Lawrence Brahm, an American who runs three boutique hotels, including one in Tibet. "And they're bored. They're realizing there's more to life than collecting toys." Buddhism's trendiness has spawned a surge in faith-related business: Flights to the Tibetan capital, Lhasa, are booked solid, monasteries are building guesthouses, and Web sites offering free downloadable mantras are proliferating.

Buddhism arrived in China from India in the first century A.D. and flourished right up to the modern era. After the Communists seized power in 1949, they discouraged religion. But like Christianity, Buddhism never entirely disappeared. Some believers continued quietly to practice at altars set up in their homes. And not long after China embraced market forces in the late 1970s and '80s, the faith reemerged in the countryside, with peasants visiting refurbished temples, where they burned incense and prayed.

Despite opening up, China remains wary of religious groups. Its relations with Rome, while improved in recent years, are hardly friendly. And some seven years ago the authorities crushed the Falun Gong, which the government deemed an unacceptable threat after 10,000 sect members showed up in Beijing to protest their official ostracism. But the government is comfortable with Buddhism. "Buddhists seldom mess with politics," says Chan Koon Chung, a writer and Buddhist in Beijing. "So it's more palatable to the government." In a recent speech President Hu Jintao even suggested that religion, including Buddhism, could help to ease tensions between the haves and the have-nots.

In the past few years, the faith has been resonating with the white-collar class. As China clocks its fifth year of double-digit growth, working 12 hours a day and on weekends is de rigueur. Li Xinglu once typified the breed: hard-working, successful, unfulfilled. She ran an events-promotion firm and brought the likes of Ricky Martin, Boyz II Men, and the Dance Theater of Harlem to Beijing and Shanghai. She mixed with pop stars, diplomats, and entrepreneurs. But something was missing. "I was smoking, drinking, and spending all night in the clubs," says Li, who is 39 and married to an American fund manager. "I spent a lot of time chasing happiness."

A recurring dream about her grandmother's death and conversations with a spiritually inclined colleague got her thinking. Before long, Li was on a plane bound for the northwestern city of Xining. After a 21-hour Jeep ride across the Tibetan plateau, she arrived at the Tse-Reh monastery. There Li met her teacher, a 19-year-old monk who set her on a new path. Today, Li has put her career on hold and focuses instead on charitable acts, including raising money for an orphanage for Tibetan children. She credits her conversion for halting a downward spiral. "I didn't understand there was such a thing as a soul or spirit," says Li.

Not long ago, young upwardly mobile Chinese flew to places such as Thailand for the sun, sea, and sand. Now, like Li, many are heading to Buddhist retreats at home. Temples are being refurbished for the tourist hordes. Jade Buddha Temple in Shanghai is now one of China's top Buddhist destinations. The 126-year-old monastery runs its own 44-room hotel (double occupancy: $134) and sells lucky amulets, DVDs of monks reciting mantras, and other spiritual paraphernalia. (Monks hoping to maximize profits are even attending MBA programs that offer temple-management classes.)
WELCOME RESPITE

In November, the chamber of commerce in coastal Xiamen sponsored the second annual Buddhist Items & Crafts fair. More than 40,000 entrepreneurs descended on the vast Xiamen International Conference & Exhibition Center and loaded up on statuary, prayer beads, incense burners, and other goods. "This is a huge commercial opportunity," says Xuan Fang, who teaches religious studies at the People's University in Beijing. "A string of prayer beads that may be worth no more than one yuan could sell for dozens of yuan in a temple."

Some traditionalists fret that Buddhism is becoming too trendy. Exhibit A: pop diva Faye Wong, a convert whose videos sometimes feature Buddhist images. And some monasteries focus as much on attracting tourists as practicing the faith. "Commercialization," says professor Xuan, "is one of the most dangerous trends of Chinese Buddhism." Still, for stressed-out yuppies, Buddhism is a respite from the rat race. "Society brings so many headaches," says Nikki Xi, a convert who works for a Web ad agency. "I'm more relaxed. [Buddhism] makes the whole work process smoother."