Lhasa, Tibet (China) -- The Monlam Chenmo, also known as The Great Prayer Festival falls on the 4th - 11th day of the 1st Tibetan Lunar month. This is the greatest religious festival in Tibet and was established in 1409 by the great Tibetan philosopher, saint, monastic teacher, and social reformer, Tsong Khapa Losang Drakpa (1357-1419), the founder of the Geluk tradition of the Tibetan Buddhism. 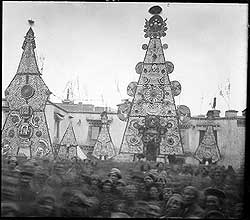 << This photo taken on February 22nd 1921 in Tibet shows the "Offerings of the 15th" (the 15th night of the Great Prayer Festival), large torma in Lhasa (Barkhor, Jokhang). (Photo courtesy: The Pitt Rivers Museum)

The first prayer was held in Jokhang, the central cathedral in Lhasa. He invited all the people of Tibet to a two-week-long festival of prayer, auspicious ritual, teachings, and celebrations, from the first new moon until the full moon of the Lunar New Year. Many hundreds of thousands, perhaps more than a million came from near and far.

It is said that during that first Great Prayer Festival in 1409, all the people gathered in Lhasa themselves beheld similar visions solidly present in space, with heavenly hosts of Buddhas and divine beings filling the sky. For the whole two weeks, the routine business of the city was suspended. Everyone got into their most religious mood and spent the whole time as if on a spiritual retreat, praying, studying, making offerings, teaching and learning, debating meaningful philosophical topics, and celebrating in ways both solemn and merry.

The Great Prayer Festival commemorates the Buddha's spiritual victory over the forces of ignorance, anger, and greed, and his attainment of enlightenment. The prayer is for the good of all beings, human beings, and the whole animal kingdom throughout the world. The belief is that the Buddhism of Shakyamuni Buddha has passed its peak, and is gradually declining. But the Great Prayer Festival will shorten this period of decline and prevent the latter end of it, when human beings would otherwise live to be only ten years old.

Traditionally, during this festival in Tibet, thousands of monks from the three monastic universities of Drepung, Sera and Gadhen, assembled before the statue of Shakyamuni reciting scriptures to pray for the long life of spiritual masters of all traditions, for the discovery and flourishment of Dharma in the minds of all sentient beings, and above all, for world peace. The Prayer Festival became more and more ceremonious as time passed by.

Examinations for the highest ‘Lharampa Geshe’ degree (a highest degree in Buddhist philosophy in the Geluk tradition) were held during the week-long festival. Monks would perform traditional Tibetan Buddhist dances (cham) and huge ritual offering cakes (tormas) were made, that were adorned with very elaborate butter sculptures.

On the fifteenth day or the full moon day of the first Lunar month, the highlight of Monlam Chenmo in Lhasa would be the "Butter Lamp Festival" (Choenga Chopa), during which the Dalai Lama would come to the Jokhang Temple and perform the great Buddhist service. Barkhor Square in front of the Jokhang would be turned into a grand exhibition site for the huge tormas. At the end of the festival, these tormas would be burned in a large bon-fire. Pilgrims would come from every corner of Tibet and donations are offered to the monks.

This festival was banned by Communist China during the Cultural Revolution and although it was revived once in 1985, it was once again prohibited in 1990. The full enactment of this tradition, which includes mass participation by the citizens of Lhasa and other parts of Tibet, has been severely disrupted since the Chinese occupation, mainly because the festival encourages Tibetan identity too strongly.

Similar events, which used to be part of the prayer festival held in Lhasa are now carried out in the northern Indian town of Dharamsala where the Dalai Lama led Tibetan Government in Exile is now located.

This year, in Dharamsala, the Monlam Chenmo began on the 17th of February and will conclude on the February 21. Monks from the three great monasteries (Sera, Gaden, Drepung) and also monks and nuns from the nearby monasteries and nunneries are taking part in this prayer gathering.

The Tibetan spiritual leader His Holiness the Dalai Lama will preside over the final prayer ceremony and will also give a teaching from the Jataka Tales at the Main Tibetan Temple (Tsug lag Khang). Large butter sculptures will be displayed amidst butter lamps offered and lit by the pilgrims and residents of Dharamsala.