Quiet corners within the world’s most highly populated, competitive country reveal a long forgotten religious past

Beijing, China -- China itself never fails to make an impression. As the Olympic Games looms ahead and as new generations of wealth, economy and culture boom outward all over China’s biggest cities, the buzz of its newfound modern life gets larger and the people get more sophisticated. 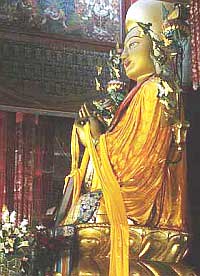 << Tsongkhapa, founder of the Gelugpa tradition, which was widely practised in China.

There is little place for spirituality and religion amidst the incessant bustle and the fact that it has long been sidelined since the Cultural Revolution of the 60s means that its absence is hardly missed.

And yet, in quiet pockets of the country, evidence of an enormous, prominent religious history reveals a completely different side to the Chinese, and what makes them who they are today.

In fact, what is most surprising is the prevalence of an ancient Tibetan Buddhist (also known as Lamaism in China) influence in the country’s history. Beijing itself boasts several religious sites that remain prominent pilgrimage sites for Chinese and tourists.

My trip takes me first into the heart of Beijing, where the city’s largest Tibetan Buddhist monastery, Yung He Gong, is located. Formerly an imperial palace of the Qing dynasty emperors, Yong Zheng and Qian Long, the whole building was later converted into a monastery by Qian Long and remained the main place of prayer for the royal family.

Qian Long himself studied under the tutelage of a prominent Tibetan Lama, and as such, Tibetan Buddhist influences are evident and prolific throughout the monastery.

It was actually common through the Yuan and Qing dynasties for religion to be incorporated into the Emperors’ and government policies. Prominent Tibetan Lamas were invited to teach in the country, and recognised as the imperial tutors, while Lamaism was strongly fostered as a way of promoting peace, harmony and understanding between China and the surrounding peoples of Mongolia and Tibet during the Qing dynasty.

Even Kublai Khan of the Yuan dynasty is remembered for commissioning one of Beijing’s largest white pagodas at Miao Ying Temple and for personally conferring the title of “Teacher to the Emperor” to the founder of the Sakya lineage of Buddhism.

As well as containing Buddha relics, a famous large white pagoda at Miao Ying Temple also encases Emperor Qian Long’s personal writings of prayers. Temples throughout the country further preserve stone tablets of the Emperors’ own writings, which are prominently placed outside in the courtyards to this day.

The main lineage practised by these emperors, and a majority of the north and western regions of China was the Gelugpa school of Buddhism, founded by the 14th century saint Lama Tsongkhapa who revived the teachings of the original Buddha and who is considered an enlightened being – a Buddha – in his own right. 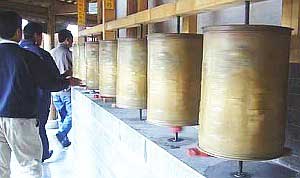 << The old tradition of prayer wheels can still be found all over Tibetan Buddhist monasteries.

This particular lineage is also widely practised by thousands of centres throughout the world now, including those in Asia and the West. Known for bringing great harmony, growth and stability to practitioners, Tsongkhapa continues to be greatly revered by the Chinese as his images can still be found throughout the country.

Among very large, ancient statues of Tsongkhapa, hundreds of cultural relics and antique Buddha statues (some of which originally came from Tibet itself) can also be found in these monasteries. Yung He Gong even boasts a hand-embroidered thangka (Tibetan Buddhist paintings or artwork of Buddhas) that was sewn by Emperor Qian Long’s mother and her attendants.

However, though hundreds of antique statues, each hundreds of years old, can still be found in these many monasteries, there seems to be little understanding among the Chinese today of its significance or meaning. The majority of the many local Chinese who visit the temples are there only to offer incense and there are few or no teachers, monastics or teachings within the monastery.

And yet, this doesn’t stop them from visiting to pay homage. The numbers of people who throng to Yung He Gong every day suggests that though the study of the teachings has dwindled, there is still strong respect and reverence for some sort of spiritual practice.

Law student Vivian Liy who was at Yung He Gong on the same day as I was, shared that, “Religion is very important to me. It can be a part of your life and practised in normal life.”

She also expressed her surprise that there were so many people – especially the younger generation – at the temple, but she reasoned that it was because, “Externally, everything in Beijing is now okay so people need to find something to satisfy the inside, which could be spirituality.”

Kumbum Monastery: where it all began

Famed for being the birthplace of Lama Tsongkhapa, Kumbum Monastery in the Qinghai province still attracts throngs of pilgrims and tourists from all around Tibet and China. 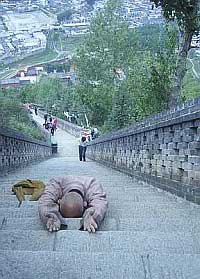 Many save up their whole lives to make this pilgrimage, to be able to do their 100,000 prostrations outside the main temple. You even see them prostrating into and out of the monastery gates.

The monastery is special because it still contains a tree that is said to have grown from Tsongkhapa’s placenta, which was buried in the ground. Now, the spot has been commemorated by a large pagoda and the monastery’s main prayer hall. People continue to visit this site with the ardent hope that they might be able to take home some of the tree’s fallen leaves.

This part of China is also notable for its strong multi-cultural and multi-faith community.

Qinghai boasts a very large Muslim population, which live alongside the Buddhist community. The whole area itself is very charged with a culturally spiritual vibe – the small community surrounding the monastery are mainly Chinese-speaking now, but take much of their cultural roots from a Tibetan Buddhist base as this was a part of larger Tibet before.

At its peak, the monastery saw a thriving community of 3,600 monks, which has since dwindled down to just 600. The guide informs us as Kumbum has now become such a tourist site, the monks have to spend more time entertaining tourists than in study and practice – a shame considering the strong focus in the Gelugpa tradition on these two aspects.

Still, as Kumbum arose out of and was inspired by Tibetans, much of its style, Buddhist images, offerings, buildings and education system retain strong Tibetan influences. The monastery now specialises in very traditional Tibetan arts – butter carvings, wood carvings, tapestries and murals – which are all related directly towards a spiritual practice.

Kumbum also abounds with stories about Lama Tsongkhapa – intricate accounts are still maintained about his life story, which trace all the way back to his mother; images depicting different stages of his life, each known for different achievements are placed throughout the many halls of the monastery making it a very special, sacred place indeed for followers of his teachings.

Wu Tai Shan – a retreat fit for the kings

To the north-west of Beijing, in Shanxi province, Wu Tai Shan stands as one of China’s five most revered and sacred sites. Believed to be the abode of the Buddha of Wisdom, Manjushri, it features five main peaks where each of the five emanations of this Buddha reside. 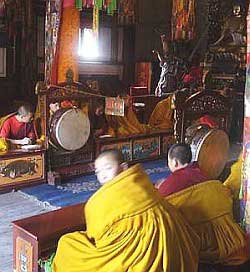 Since the time of the Emperors, it has been customary for pilgrims to visit all five peaks to pay homage at the temples atop each mountain. Even Emperor Qian Long made frequent retreats to the area and even attempted to visit the five abodes himself. At its peak, Wu Tai Shan contained over 500 temples; less than a hundred remain today.

Still, with what remains, it is easy to forget that you just left Beijing’s 21st-century glare behind four hours ago. Laypeople come by the busloads to visit the temples in the area and incense offerings abound with people’s prayers.

Considering how far back the history dates, it’s pretty amazing how much of it has been preserved; and while China is seldom associated with religion or spiritual practice, the Chinese openness to retaining this part of their history is a wonderful surprise for many spiritual seekers.

It is significant that the Buddha Lama Tsongkhapa is considered an emanation of Manjushri, making it a particularly important place of pilgrimage for the emperors. Because many Buddhist practitioners of the time followed the Gelugpa tradition closely, monasteries are still centered around the predominant images of Tsongkhapa and Manjushri, and continue to follow the Gelug practices until today.

Wu Tai Shan is famed as being one of the most significant places in China for the growth of Gelugpa teachings and translations of important Buddhists texts, and is known historically for being a retreat where many renowned Chinese and Tibetan teachers and writers accomplished great works.

As in Beijing, monastic communities here are small. In spite of that though, they still retain a stronghold on the area. Respect and reverence is evident in the faces of both pilgrims and tourists; and the beloved legends of visions of Manjushri that accompany each sacred site claims a place in the Chinese’s heart that is as dear as the buildings themselves.