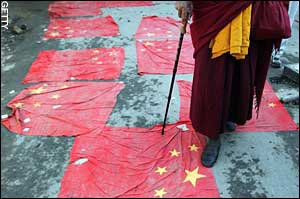 More than 100 people are feared dead after riots following protests by
Smoke appeared above the golden roofs of Rebkong monastery in a sign that they are determined to stand up for their beliefs.

The effect was immediate. Businesses pulled their shutters down, fearing more violence, as they watched lorry loads of paramilitaries roar up the street towards the protest.

Riot troops in helmets and balaclavas ran in formation past the monastery's white mound-shaped prayer stupas, even as the faithful continued to perform their devotions.

From inside came the pop of more incense burning. It was another day of unabashed opposition to Chinese rule.

Demonstrations and acts of civil disobedience like this one have spread across large swathes of China, including not only what Beijing calls the "Tibetan autonomous region" but provinces like Sichuan, Gansu and Qinghai, on whose borders Rebkong sits.

Tibetans are few in number, compared to the 1.2 billion ethnic Chinese, but they are spread over a huge area.

In fact, the conflict between Tibetans and the authorities began in Rebkong even before the protests in Lhasa, which set off a wave of demonstrations and anti-Chinese violence.

The current stand-off was described by three monks who, despite the risks, agreed to be interviewed by The Daily Telegraph.

It followed a common pattern - a mixture of trivial and profound resentment.

On the one hand, a fight had broken out at a balloon stall between a Tibetan and a Muslim Chinese. The Tibetans felt the police had taken the side of the Chinese and beaten up the Tibetan. On the other, according to one monk, an order had gone out that pictures of the Dalai Lama - everywhere to be seen here, and previously tacitly allowed - were to be forbidden.

The subsequent demonstration, late last month, brought together the 470 monks of the monastery and more than 1,000 ordinary local people, before police fired tear gas to break up the crowd.

The monks said 10 people were injured, two seriously, and 200 people were arrested, though they were released after another protest surrounded the government offices. On that day, everything changed.

"We have been surrounded by paramilitaries pointing guns,” said the monk. "This has been repeated. There are still police in plain-clothes everywhere, even when the paramilitaries are not there. It's all too harsh."

In fact, he said, the atmosphere in the monastery had been different all year, in line with allegations that Chinese control has tightened in recent months.

At patriotic education classes, monks have to repeat mantras such as "I love the country". They are told to denounce the Dalai Lama, but refuse, though they are made to sit in silence while their ideology instructor does so.

Now the situation is worse. The monks have been forbidden to gather in groups of more than two - another reason for the ban on the incense-burning.

Most are now scattered around town or have returned to family homes.

A paramilitary officer stands outside the monastery taking video of those walking past. He pays particular attention to Westerners. But the monks continue to resist, though without the violence seen in Lhasa.

Their demands range from the everyday - they say Tibetans are excluded from local services like hospitals and banks because of the need to speak Mandarin - to the overarching: respect for their religion, the return of the Dalai Lama, and, some say, independence.

"Why do we protest?" said a second monk. "Because we want freedom and we want the Dalai Lama to come back to his own land."

What did he mean by freedom? "We want the right to practise our own culture," said the third monk. "We do not want to use violence, but we want to pass our culture on."