DHARAMSHALA, India -- The Dalai Lama said Tuesday he would resign as Tibet's spiritual leader if the unrest in his homeland worsened, and rejected Chinese allegations he was behind the violence. 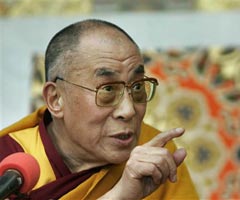 "If things are getting out of control, then the option is to completely resign," he told reporters, adding that he had made the same pledge to step down during previous outbreaks of violence.

"This movement is beyond our control," he said.

The Dalai Lama said he was not in a position to tell Tibetans living under Chinese rule to "do this or do not do that".

He also said that independence for Tibet was "out of the question" and called on Tibetans and Chinese to live "side by side".

He said Chinese officials were welcome to visit him and investigate their charges that his India-based exile movement was behind the anti-Chinese unrest that erupted in Tibet last week.

"Come here, please investigate the facts. The Chinese can come and look at everything," the 72-year-old said.