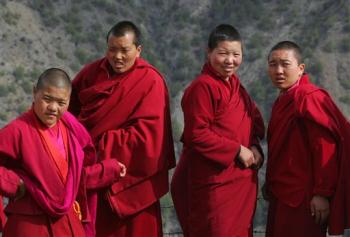 << Tibetan nuns stand outside the Taibaling Nunnery at Shusong Village, in the mountains about 50 kilometers (31 miles) from the border with Tibet, in China's southwest Yunnan province Tuesday March 25, 2008. The nunnery was rebuilt on the site of a 300-year-old monastery after the monastery and the nearby nunnery were destroyed during China's 1966-76 Cultural Revolution. Some 130 Tibetan nuns currently study at the nunnery. (AP Photo/Greg Baker)

Public Security Minister Meng Jianzhu announced that "patriotic education" classes would be expanded at monasteries, the Tibet Daily reported Tuesday. His visit was the first by a high-level central government official since protests in the Tibetan capital turned violent this month.

Unrest among Buddhist clergy has been blamed in part on the widely reviled classes, which force monks to make ritual denouncements of their spiritual leader, the Dalai Lama, and declare loyalty to Beijing.

Monks and nuns who refuse to cooperate can be jailed. The U.S. State Department said in its 2007 report on religious freedom around the world that dozens of Tibetan clergy were serving prison terms for their resistance to "patriotic" or political education.

Despite such complaints — and repeated government claims that all Tibetans support the Chinese government's stance — Meng said during his trip to Lhasa on Monday that the campaign should be expanded in a bid to "grasp and direct public opinion in the correct direction."

"Deeply enact propaganda education in ethnic and religious policies and the legal system among all the temples," he was quoted as saying. "Let all people at home and abroad and all ethnic groups thoroughly understand the true facts of the matter."

In visits to Jokhang Temple, Tibet's most sacred shrine, as well as Sera and Drepung monasteries, where the initial protests were launched March 10, Meng criticized the monks for participating in the protests.

"Every religion should carry out their activities according to the law and should never undermine national solidarity," he was quoted as saying by the official state news agency Xinhua. "Participating in the riot essentially violated the doctrines of Tibetan Buddhism."

He was accompanied by Zhang Qingli, Tibet's hard-line Communist Party leader, who said the region was in the front lines of a battle with the Dalai Lama and his followers. "From start to finish, we face a prolonged, extreme, complex struggle," he said.

Their harsh words signaled China's intention to keep a hard-line stance in its dealings with Tibet.

"It's completely unsurprising that an intensification of the 'patriotic education' would take place in the wake of these riots in Lhasa," said Barry Sautman, a China expert and social science professor at the Hong Kong University of Science and Technology. "(Zhang) is someone who cut his teeth fighting separatism in Xinjiang and now Tibet. He'll make use of the tried and true method."

The uprising is the broadest and most sustained against Chinese rule in almost two decades and sparked demonstrations in neighboring provinces in western China. Thousands of troops and police have been deployed to contain the unrest.

The government says at least 22 people have died in Lhasa; Tibetan rights groups say nearly 140 Tibetans were killed, including 19 in Gansu province.

The protests have put China's human rights record under an international spotlight, embarrassing and frustrating the communist leadership, which hoped for a smooth run-up to the Beijing Olympics in August.

At a meeting of the U.N. Human Rights Council in Geneva on Tuesday, the European Union, United States and other Western nations again called on China to stop using force against Tibetan protesters. They also urged China to engage in dialogue with Tibetan representatives.

The Chinese delegation insisted the situation in Tibet was entirely an internal affair.

"The criminal acts of violence by a tiny number of people in some parts of China were by no means the so-called 'peaceful demonstrations,'" Qian Bo of the Chinese mission to the U.N. in Geneva told the council. He said protesters had committed serious crimes, including looting and setting fires.