Temples stand the test of time

BEIJING, China -- Located on a hillslope in the northwestern suburb of Yangzhou, an ancient city in Jiangsu province, Daming Temple boasts a 1,500-year history. 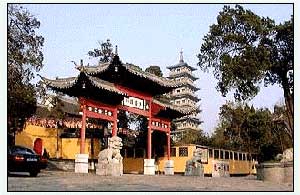 << Located on a hillslope in the northwestern suburb of Yangzhou, an ancient city in Jiangsu province, Daming Temple boasts a 1,500-year history. (Xinhua File Photo)

The temple is equally renowned in Japan due to monk Jianzhen, a name familiar to many Chinese and Japanese.

From AD 742 (in the Tang Dynasty), at the invitation of the Japanese, the superior of Daming Temple began venturing across the sea to Japan in a bid to spread Buddhism. After five failures, he finally reached Nara, then the capital of Japan.

Jianzhen spent his last years in Nara, devoting all his energy to promoting Buddhism, medicine and technology.

In AD 759, he presided over the building of Toshidai-ji temple by applying the most advanced construction techniques he brought from China.

And more than 1,200 years later, the link created by Jianzhen between the two temples survives.

In 1980, a dry-lacquer statue of Jian Zhen made shortly after his death was brought to Yangzhou from Nara for a "hometown visit".

In 2003, grand commemorations were held in Yangzhou and Nara to mark the 1,250th anniversary of Jianzhen's arrival in Japan.

Last year, a standing statue of Jianzhen was presented to Toshidai-ji Temple by Daming Temple.

Monk Neng Xiu, head of the Daming Temple who accompanied President Hu Jintao on his visit to Toshodai-ji on Saturday, will set off for Japan again.

"We plan to hold a 'Jianzhen Cultural Festival' in Nara soon to commemorate and promote Jian Zhen's spirit," said Xu Fei, an officer from the Yangzhou municipal administration of ethnic and religious affairs.

"We believe the president's visit will further enhance the religious exchanges between our two temples, and even our two countries," Xu added.