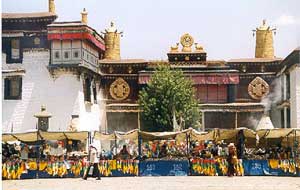 Chinese authorities shut down the Jokhang Temple, in the Tibetan capital of Lhasa, after a series of protests by Tibetan monks in March. The protests, initially peacefully, eventually led to violent clashes between the monks and Chinese authorities.

The Xinhua news agency said the temple had reopened Friday. The agency reported that an estimated 400 Buddhist pilgrims and 40 tourists had visited the temple within hours after it opened again.

China has accused the Dalai Lama, Tibet's exiled spiritual leader, of provoking unrest as part of a bid for Tibetan independence. The Dalai Lama says that he wants autonomy, but not independence, for the region.