Lhasa, Tibet (China) -- The notation looks like billowing clouds with swirling trails. The voice of the chant leader Kachen Lobsang traces the notation from left to right. 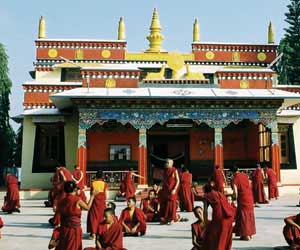 The small letters form the words and then the vowels, in red, are surrounded by bulbous lines that represent the swelling of the chant. The squiggles are imitated in the intensity of the note. This is a prayer to Mahakali, one of the terrifying Buddhist gods who protect Tibet's Tashi Lhunpo Monastery.

Lobsang is actually singing from a laptop printout. The original "manuscript" of the chant was brought out from Tibet after the Chinese _annexed the country in 1959, and is kept in exile at the Tashi Lhunpo Monas tery, in the southern Indian state of Karnataka. "I'm not an expert," says Lobsang, at reading the notation. "It's something they do in the Tantric College." It was Kachen Lhakdor, a monk now about 100 years old, who brought the manuscripts from the original Tashi Lhunpo monastery in Shigatse, Tibet's second city. It is unlikely that anything like this survives there.

The Tashi Lhunpo ("heap of glory") Monastery in Tibet was founded in 1447 as the seat of the Panchen Lama, the second most important spiritual leader in Tibetan Buddhism after the Dalai Lama. The identity of the current Panchen Lama is one of many disputes between Tibetan religious leaders and the Chinese authorities. The Chinese seized the six-year-old boy declared to be the reincarnated Panchen Lama in 1995 and nominated their own replacement candidate; the boy's present whereabouts are unknown.

The Tashi Lhunpo Monastery in exile was founded close to several other Tibetan monasteries in south India in 1972. There are about 300 monks in residence. As well as bringing the old chant notations, Kachen Lhakdor also memorised the monastic dances performed in Tibet and has re-created them in exile. Led by Kelkhang Rinpoche, the monks from Tashi Lhunpo whom I met are a group of eight taking their traditions on tour. "First, we have to preserve our Tibetan culture and religion," explains Rinpoche. "Second, we want to show them to the world."

This tour is well timed, coinciding as it does with all the publicity the situation in Tibet has had since the protests in Lhasa and the demonstrations surrounding the Olympic torch. But in fact, this is the third UK tour by the Tashi Lhunpo monks in three years. They made sand mandalas at the House of Commons in London and in Nottingham to mark the Dalai Lama's recent visit. The mandala is an intricate cosmic diagram, made over several days out of millions of grains of coloured marble. "It represents impermanence," explains Rinpoche. "It is very beautiful and very hard to make, but then we destroy it and throw it into the water."

The monks are performing in venues from Cam bridge and Gateshead to Portland Prison and Womad, and have released a CD of chants, Dawn Till Dusk. "We don't feel this is a show," insists Rinpoche. "What we do in the mon ast ery, we are doing here." One of their chants is a tantric ritual called Kunrik ("all-knowing"). Five monks with long, dark fringes and ceremonial headdresses start to chant and move their hands in a meticulous sequence of hand gestures that represent 37 deities. The goddess Green Tara, for instance, is represented by three fingers of the right hand raised upwards and the third finger and thumb touching as if holding a flower.

As the mantras to the deities are spoken, fing ers are raised, palms are opened, hands cupped; it looks like sign language in slow motion. It takes 12 minutes on stage, but more than five hours in the monastery. So what are we missing? On tour they simply do the hand gestures, but in the monastery they invite each of the deities to come. They converse with them and make them offerings. "It's like inviting somebody into your house," explains Rinpoche. "All our music is offered to the gods and goddesses. But we don't invite them when we're here, to make it shorter, but also because they might come."

The monks include in their performance a pair of the three-metre-long dung chen trumpets, the sound of which seems to come from the depths of the earth itself. They perform dances such as Dur-dak Gar-cham ("lords of the cemetery"), in which two skeletons remind you that, however rich and important you may be, you can take nothing with you when you die. Another message of impermanence.

The monks-in-exile feel that spiritual teaching is lacking in Tibet, which is why they want to re-create it outside the country. Rinpoche has visited the original Tashi Lhunpo, but could not risk saying anything that connected him to the monastery in exile. He believes he is the reincarnation of a Tashi Lhunpo abbot who died in the 1960s during the Cultural Revolution. "When I went back there, I felt very strongly I'd been there before." The rituals and the dances may seem esoteric, but for him and the other monks, their preservation and demonstration has become a mission. "We are all hoping to go back to Tibet one day and when we do we can transplant very quickly because we have preserved our culture. None of us knows when that will be, but if I can't go in this life, I will go in the next."

For details of the Tashi Lhunpo monks' tour see: www.tashi-lhunpo.org.uk