Historic legacy lives on in Hangzhou

Hangzhou, China -- Hangzhou, one of the seven ancient capitals of China, served as the capital of the Wuyue Kingdom during the Five Dynasties (AD 907-960) and the Southern Song Dynasty (1127-1279). Today the city still offers a myriad of historic legacies. 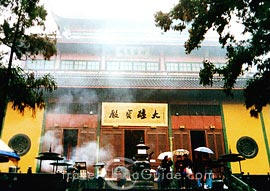 Lingyin, or the Temple of the Soul's Retreat, has historically been the most renowned destination for Buddhist pilgrims in the Yangtze River Delta.

The monastery was founded in 326 during the Eastern Jin Dynasty (317-420), purportedly by the Indian monk Hui Li. In the 10th century, when Hangzhou was the capital city of the Buddhist Wuyue Kingdom, the temple for the first time gained its unprecedented importance. King Qian Chu began large-scale construction of the monastery to show his devotion. When complete the temple complex included nine buildings, 18 pavilions, 72 halls and more than 1,300 lodging rooms for over 3,000 monks.

The temple has undergone several restorations, the latest of which was in the 1970s at the urging of Premier Zhou Enlai. Lingyin Temple is now considered as one of the largest Buddhist complexes in the country.

Upon entering the Great Hall of the monastery, visitors will see a 200-year-old statue of Maitreya, also known as the Laughing Buddha, which has a huge belly. The Four Heavenly Kings, or Buddhist guardians, stand on either side of Maitreya.

Visitors then enter the main hall of the temple complex, the Jeweled Hall of the Great Heroes, or Da Xiong Bao Dian in Chinese. It houses a 64-foot-high statue of Sakyamuni, a representation of the Buddha himself, Siddhartha Gautama. Covered with gold leaf, Sakyamuni is thought to be the largest sitting Buddha statue in China.

The temple grounds also hold a household and mystical hill called the Peak Flying from Afar, a limestone pinnacle over 209 m high.

Standing on Yuelun Hill on the north bank of the tidal Qiantang River, the pagoda is another masterpiece built during the Wuyue Kingdom - this one designed to vanquish flooding and destruction from the Qiantang River. It was completed in 970.

The name Six Harmonies was given to characterize its purpose of restoring the balance between the heavens and earth, as well as north, south, east, and west. It was erected in the hope of combating the "evil" river's tidal action.

The brick-and-wood pagoda of today has been reconstructed several times. Large-scale reconstruction during the Southern Song Dynasty resulted in a brick structure. Wood adornments were added in the late Qing Dynasty (1644-1911) and subsequent renovations over the past century.

Today, the 13-story pagoda commands a spectacular view of the Qiantang River and is an image of centuries-old majesty.

Originally erected on northern Nanping Hill, legend says the seven-story Leifeng Pagoda was built to mark the birth of a son to a Wuyue Dynasty king.

On the south of the West Lake, Leifeng Pagoda is considered the top scenic structure around West Lake due to its stunning silhouette in the glow of evening.

For almost a thousand years the pagoda withstood fires and wars, but finally collapsed in 1924, due to the removal of bricks as souvenirs by locals.

Rebuilt on historic ruins, the present pagoda was restored in 2000 in the style of the Southern Dynasty (AD 420-589) and opened to the public in 2002. The 71.7-m-tall pagoda is eight-sided with five stories.

Baochu Pagoda on the Precious Stone - or Baoshi - Hill is a historic resort on the north side of the West Lake.

The six-sided grey brick pagoda was first built by a prime minister in the Northern Song Dynasty (960-1127) to pray for the safe return of King Qian Chu, who was summoned by the emperor.

The pagoda initially had nine stories, but the number subsequently diminished to seven stories. Its latest refurbishment was completed in 1933. It now towers 45 m high.

On the eastern side of the West Lake beside the park of Orioles Singing in the Willows - Liulangwenying Park in Chinese - Qianwang Temple was built as a memorial to renowned King Qian Liu, the founder of the Wuyue Kingdom and profound contributor to the development of Zhejiang province. King Qian chose Hangzhou as the capital city of his empire.

Walking along the black flagstones through five toriis - traditional Chinese gates - see a bronze statue of the king in martial dress. Not far from the statue, two sparkling ponds add gentleness to the grandeur of the 4,600-sq-m temple.

Numerous paintings and sculptures surround two central courtyards inside the grounds of the temple. A huge vessel stands guard in front of the memorial in one of the courtyards.

There is also giant sculpture containing symbols of the zodiac that is engraved each year to mark the current year in the Chinese lunar calendar.