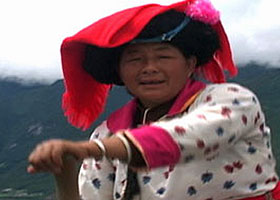 What makes this community unusual is the women's traditional attitude to sex and fidelity.

Mwa-Swa men and women believe in "walking marriage" – rather than the usual vows and commitments that bind two people together.

In a walking marriage the woman chooses whether to accept a man who walks into her room at night. But even if she agrees, the man has to be gone by morning.

Marriage ceremonies do not exist and the women refuse to even consider the option to commit to one man.

Despite the Mwa-Swa's reputation for sexual promiscuity, families of men and women in the more private villages form deeply loving relationships without the binds of marriage.
People look after each other and raising children is also on the responsibility of their uncles and aunts.

These days tourists from all over China travel into the remote villages of Yunnan province, attracted by the prospect of sleeping with women according to the local custom. But this would-be sex tourism is now threatening the very fabric of an ancient community.

Mwa-Swa's popularity with men from out of town has turned some villages into tourist traps. But in the more isolated villages, local women still find this way of life empowering.

Surprisingly, there are also many women who travel from all around China to experience "walking marriages" with the local male population.

With tourism expanding into even the more remote villages in the region, the old ways seem set to change for ever. Locals feel that they are sacrificing their identity and culture for the financial gains of hosting tourists in their villages.