Mount Emei, China -- If you read stories of the Monkey King, known to the Chinese as Journey to the West, a classic novel written by Wu Cheng'en (1500-1582) and finished during the Ming Dynasty (1368-1644), you may wonder where to find a place where freely roaming and frolicking monkeys attain supernatural powers and offer their services as apprentices to a grand monk on his pilgrimage to a fantasyland. 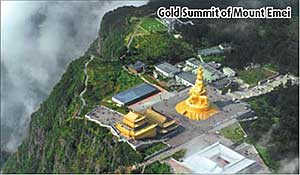 One place that fits the description is Mount Emei, about an hour and a half's drive from Chengdu Shuangliu International Airport.

Mount Emei is in a mountain range that includes many picturesque peaks. The scenic zone covers 154 sq km and has four mountains, all named "moth eyebrow" - what emei literally means in Chinese.

First Moth and Second Moth stand across from each other in such a position that they form a pair of beautifully painted eyebrows, giving the place its name. Another interpretation attributes the origin of the name to the two rivers that flow in gently meandering waterbeds.

Poet Li Bai famously wrote that "the Kingdom of Shu has many fairy mountains, and Mount Emei stands above them all". As one of the four sacred Buddhist mountains of China, Emei's patron bodhisattva is Samantabhadra, known as Puxian in Chinese.

One of the places to have a "supernatural vision" could be at the highest peak, 3,099 m, where beyond a high cliff and a sea of clouds refract light to form a halo. The round rainbow adds to the reputation of the mountain as a blessed land.

Emei was first a Taoist mountain, then transformed to Buddhist. At the height of its religious use, 150 temples were scattered across its ridges and valleys, built to fit its natural contours. Now only 20 remain. Often the first one encountered today is Baoguo Monastery at the foot of the mountain and surrounded by exquisite gardens. Wannian Monastery is the oldest, dedicated to a deity standing on the back of a white elephant. Qingyin Temple is laid out in an irregular plot on a narrow piece of land between the Black Dragon River and the White Dragon River.

Outside the exquisitely landscaped temples is a world of fauna and flora so rich that a nature lover would take more than the three days required for a regular tourist uses to revel in the beauty of Mount Emei. About one-tenth of all the plants growing in China and one-third of those in Sichuan can be found there.

The Tibetan macaque is a species of woolly monkey that can stand frost. If you have an encounter with them, you should respect their etiquette. If you want to feed them, offer food on an open palm. Avoid touching them, especially the young. If you have nothing to offer them, show them your empty palm. But keep a distance if you don't want to interact.

About 40 km from Mount Emei is another site of mystery and spirituality - Leshan Giant Buddha.

China's largest Buddhist statue, the seated Maitreya Buddha, is 71 m in height, with shoulders 28 m wide. His smallest toenail is large enough to accommodate a seated person. As the locals say, "the mountain is a Buddha and the Buddha is a mountain". Observed from afar, across the river, the whole mountain range looks like a slumbering Buddha, with the statue as its heart and a pagoda on the other side a potent male symbol.

In an effort to calm the turbulent waters that plagued vessels traveling down the river that flows around the mountain, a monk named Haitong resorted to Buddhist power. He started construction of the statue in 713 AD. When funding for the colossal project was threatened, he gouged out his own eyes to show his piety and sincerity, according to local legend. Construction was finished by his disciples 90 years later.

The statue indeed helped stop some of the flooding. Scientists explained that so much stone was removed from the cliff face and deposited into the river below that the currents were altered and slowed, making the waters safer for passing ships.

In 1996, both the statue and nearby Mount Emei were awarded world heritage status by UNESCO. Just as you don't have to be Monkey King to enjoy the tale from the Tang Dysnasty, you don't have to be a Buddhist to be struck by the beauty of nature combined with the human touch of spirituality.