The Buddha's latest journey to China

Luoyang, China -- During his visit to China in June, 2003, the then Indian prime minister, Atal Bihari Vajpayee, promised a "gift" to China from the Indian government. I was part of the Indian media delegation accompanying him. But, to be honest, I was more interested in weightier matters of India-China relations and didn't think much of the "gift". Actually, I didn't even know exactly what it was going to be. 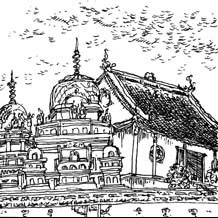 Last week, I knew it - because I saw it. And, what a historic gift it is! There it stands on a plot of land adjoining the Baima Si (White Horse Temple) at Luoyang. It is a replica of the Sanchi stupa, the most famous Buddhist shrine in India.

It's nearly complete - the circular dome - and the entire structure - made of the pink stone transported all the way from India, with the friezes on its walls depicting scenes and scriptures of familiar Buddhist tales. Inside the prayer hall a seated Buddha seems to be awaiting visits by yet another generation of devotees. Interestingly, the statue too is a replica of the famous one at Sarnath, another major Buddhist temple in India. The shrine would be open to worshippers and visitors early next year.

Several things about this "Sanchi of China", as I'd call it, are of great historical significance. First, the choice of the site. Baima Si, as is known, is the first Buddhist monastery on Chinese soil. The legend of its construction, well-known too in Buddhist circles, is worth recalling in the new context. It says the Chinese officials, sent out by the Emperor, met two Indian Buddhist monks in present-day Afghanistan and returned with them - and with many Buddhist texts - to Luoyang.

The success of the mission resulted in the construction of Baima Si - in the first century AD. The monastery was so named because two white horses were said to have carried the loads of Buddhist texts and the Indian monks. In a way the coming of the Sanchi stupa to China is a continuation of the Buddha's first journey to the Middle Kingdom. It seems just the right thing that this latest Buddha from India should share the same ground with the oldest Buddhist monastery in China.

The other thing that strikes you is the location's proximity to the Longmen grottoes, only 16 km away. At Longmen, the most obvious feeling is about the tragic history of the destruction and damage that it suffered at the hands of European and other Western cave-raiders. You can't but feel sad looking at the beheaded or otherwise disfigured statues.

We know many of the stolen statues from Longmen now adorn a museum in New York, just as the world's oldest printed book, the Diamond Sutra, stolen from the Dunhuang Caves, is now in the British Library in London. China has as valid a right to claim them back as the Greeks had over the Elgin Marbles.

It's reassuring, though, that the Indian "gift" speaks of another historical tradition - of religions and cultures finding new, alien homes, despite the vicissitudes of politics and international relations.

And, temples aren't just about religions. They are a great source of cultural understanding and even basic exchanges between people. For all their hoary traditions and historical contacts, India and China today remain distant neighbors. It's amazing how little common people of the two great nations know about each other's present history. No wonder this lack of knowledge allows the stereotypes to survive and thrive.

I'm told there are plans to build around the Baima Si complex a major international Buddhist center - with Buddhist structures typical of other countries to be built in close proximity to one another. One from Thailand has already come up there.

You don't have to be a Buddhist to rejoice in the idea.