Zen and the martial art of Buddhist temple maintenance

Guandu, China -- THE cluster of temples at the heart of this dusty, traffic-clogged town are picturesque reminders of China's faded Buddhist past. Dogs warm themselves in the winter sun as a few toothless devotees bow before smiling Buddhas. 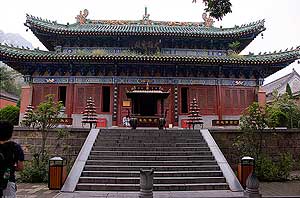 While soothing to some, the tranquility is galling to Guandu's city fathers, who recently spent $3m to rebuild the four temples.

"The temples have been money losers," grumbled Dou Weibao, the commissioner of ethnic and religious affairs in Guandu, which has long since been subsumed by the sprawl of Kunming, the capital of Yunnan province.

Dou found a saviour 1,200 miles away, in the Song Mountains of central China, where the warrior monks of Shaolin have long since mastered the art of monastery marketing.

Since the early 1990s, the chief abbot, Shi Yongxin, has turned Shaolin into a lucrative draw for kung fu aficionados and has transformed his lithe disciples into global emissaries for the temple's crowd-pleasing mix of Zen Buddhism and fly-kick combat.

In November, the two parties struck a straightforward deal. In exchange for managing the Guandu temples for 30 years, the monks will keep all proceeds from the donation boxes and gift shops. Shaolin said its primary goals were to carry out charitable activities, maintain the temples and "spread the faith".

Dou, an atheist, sees things somewhat differently. "We're going to use their fame to attract more business," he said as he and some newly arrived monks exchanged pleasantries.

Guandu officials say they will get no money from the deal but they hope the Shaolin mystique will pull in the kind of crowds that have turned the monastery's Henan province flagship into one of China's most popular tourist destinations.

Dou said the government would save the £57,000 a year previously spent on temple maintenance.

They are also counting on the tax revenue from a vast new mall that is nearing completion next to the temple complex.

The management deal has provoked howls among some Chinese, with many critics decrying the commercialisation wrought by Yongxin, who drives a Land Rover and has established Shaolin branches in Italy, Germany and Australia.

"Shaolin Chain Store", read the headline of one recent posting on Sina.com, a popular website. "There's nothing wrong with chasing profits and fame, but they can't use the name of Buddha."

But after reading about the Shaolin deal in his local newspaper, Ying Daojin made the eight-hour journey by bus just to catch a glimpse of the monks. A 30-year-old corn farmer from northeast Yunnan, Ying described himself as a non-believer but seemed willing to give religion a try. "I've heard Buddhism can open your mind," he said wide-eyed as a monk glided by. "Kung fu is also good for your health."

According to his secretary, Yongxin, the head monk based in Henan province, does not give telephone interviews but he encouraged a reporter to seek out Master Yanjiang, the abbot assigned to run the Guandu complex.

Yanjiang, however, proved just as elusive and refused to discuss his plans for the temples. His monks were decidedly unapproachable.

The young men waved away inquiries. When one bespectacled monk found himself the subject of a photographer's interest, he grabbed the camera and then offered a menacing martial arts pose when his demand to have the pictures erased went unmet. Negotiations proved fruitless and the pictures were deleted. The monk bowed, smiled and walked away.

A few days after their arrival, the monks taped a handwritten poster at the temple entrance advertising kung fu lessons. The cost: £30 for a month of instruction, nearly a full month's wage for some Chinese workers. The security guard at the front gate said the classes were selling well, with more than 100 people already signed up. He showed off the student roster, most of them children and teenagers. "Everyone loves the Shaolin monks," he said with a smile.
TOP