Sarnath, India -- Changes will definitely take place in China and that the issue of Tibet will prevail in the long run, exiled Tibetan leader His Holiness the Dalai Lama said Sunday. 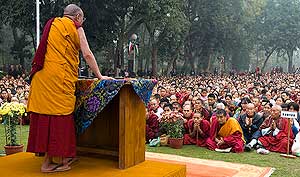 << His Holiness the Dalai Lama speaks at a special audience to some 4000 non-Tibetan Buddhist followers from the Himalayan region of India, Nepal and Bhutan in Sarnath, India; January 11, 2009. The Tibetan spiritual leader is giving week-long teachings at one of the most sacred Buddhist pilgrimage sites in the world. (Photo: Tenzin Choejor/OHHDL)

“In China also changes will certainly take place. It is clear that it will not remain unchaged," he added.

“So ultimately the Tibet’s issue will have to be resolved as it is not going to die out,” he said.

The exiled Tibetan leader was speaking here this morning at a special audience for some 4000 non-Tibetan Buddhist followers, who equally revere him as their supreme spiritual leader and have come to Sarnath to attend a week-long teaching by him.

Buddhists from Himalayan regions of Nepal, Bhutan and India, including Ladakh, Sikkim, Arunachal Pradesh and, Lahaul and Spiti; were seen listening with deep reverence to an almost hour-long talk by the Tibetan leader.

“For thousands of years people from Himalayan belt have lived and existed side by side as neighbours with people of Tibet and have shared a unique relation through common cultural and spiritual traditions of Tibetan Buddhism,” the Dalai Lama told the gathering before carrying on with the third day of the week-long teachings, which began on Thursday here.

Saying Tibet has been facing great tragedy in recent times, the revered Buddhist leader urged the “free people” of the Himalayan region to make renewed and collective efforts to preserve and maintain the centuries-old shared and rich traditions of Buddha Dharma.

“People all along the Himalayan region have also played equally significant role in preserving and maintaining the centuries-old rich traditional and religious heritage of Buddha Dharma. Even at a time of crisis in Tibet, we found new support from our Dharma friends from the Himalayan regions in saving our unique and rich cultural and spiritual heritage from facing complete destruction,” the Dalai Lama said.

“Even now, Tibet’s situation in general is very grave; identity of its people and cultural heritage is almost resting on the verge of extinction under the Chinese rule,” the Dalai Lama told the audience.

“But like the changing scenario of the world, changes are also already taking place in China,” he said.

“And there is an unwavering courage and unity of Tibetan people. More and more peace-loving people and advocates of non-violence around the world are also showing growing solidarity to the just and peaceful struggle of the Tibetan people,” he said.

“Also lately after learning the truths about Tibet, there have been more and more Chinese people who have been sincerely expressing their solidarity with the Tibetan people,” Dalai Lama said, adding “Especially after March unrest, there has been a growing number of Chinese intellectuals openly expressing solidarity to the Tibetan cause through writings and postings on internet.”

“However, we need to make all our necessary efforts accordingly without losing our hope and courage,” he said, adding “Even if are to face the worst; we must remain prepared with a clear plan and foresight to carry on with our struggle for the next few generations if necessary.”

“Since coming into exile in 1959, we have achieved many of our planned strategies, and there are still many more to improve, he said.

“But we are confident that our sustained struggle over the last fifty years in exile is the legacy of its survival in the long run,” the Dalai Lama said.
TOP