Lhasa, Tibet (China) -- Buddhist clergy in Tibet have been warned not to take part in any political activity in the run-up to the anniversary of last year's massive protests against Chinese rule. 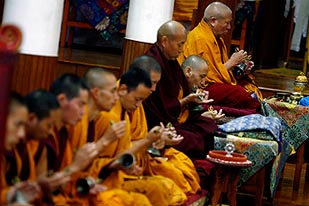 The warning from Lobsang Gyaincain, a member of the Chinese communist party's regional standing committee, came in the wake of a reported crackdown earlier this week on Tibetan protesters in Lithang, a volatile traditionally Tibetan region in China's Sichuan province.

In comments reported in the official Tibet Daily newspaper, he said clergy must "refuse to take part in activities aimed at splitting the motherland, and not take part in illegal marches, demonstrations and other activities that disrupt social order."

On Wednesday Lobsang Gyaincain, who heads a body that directly supervises Buddhist temples and clergy, called a meeting of Buddhist leaders at which he was quoted as urging monks and nuns to recognise the "reactionary nature" of the Dalai Lama's supporters.

The meeting has been seen as an indication of mounting nervousness among Chinese officials ahead of next month's anniversary.

He reportedly also warned religious leaders to be wary of plots to use temples and the clergy to carry out "infiltration and disturbances".

At least 21 people were arrested according to two Tibetan advocacy groups.

China insists that Tibet has been part of its territory for four hundred years, although many Tibetans say they were effectively an independent nation for much of that time.

Last year, what began as peaceful anti-government protests to mark the anniversary of the 1959 uprising turned into massive demonstrations that rocked Lhasa, the capital of the Chinese autonomous region, badly affecting the economy and once-thriving tourism industry.

State-run Chinese media have reported that more than 100 monks and others have been jailed for their part in the March protests.
TOP