BEIJING, China -- As one of the six sovereign monasteries of the Gelug school of Tibetan Buddhism, the Labrang Monastery is to see the biggest maintenance and repair work in its history of 300 years. 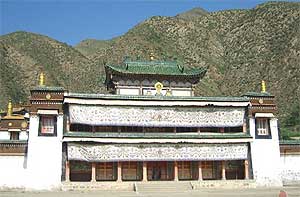 Vice director of the Cultural Bureau of Gannan Prefecture Zhang Yongsheng said that the overall plan of Labrang Monastery's protection has been approved by the State Administration of Cultural Heritage.

At present, the prefectural Development and Reform Commission is doing research on the project's feasibility, and the maintenance and repair work will soon get under way.

Seated in the town of Xiahe, Gannan Tibetan Autonomous Prefecture in west China's Gansu Province, the Labrang Monastery was built in the year of 1709. It covers an area of 822,584 sq.m, and a built-over area of 823,000 sq.m. There are six sutra halls, 84 temple halls, 31 Tibetan-styled penthouses, 30 buddha palaces, and some 500 rooms for prayer wheels.

Integrating the wisdom of Tibetan, Han, and Mongolian crafts-men, Labrang Monastery is noted for its exquisite architectural art and brilliant religious culture. It is a center of the Gelug sect of Tibetan Buddhism outside Tibet, and the highest Tibetan Buddhist institute of learning in northwestern China.

Institutions such as the Research Institute of Cultural Heritage Protection under Tsinghua University, and Administration of Cultural Heritage of Gansu Province have run a field survey of the monastery. They examined problematic buildings and interviewed prominent religious figures to solicit suggestion and advice regarding the protection of cultural relics in the monastery.

Previously the Institute of Maintenance and Repair of Cultural Relics of Gansu Province had surveyed and mapped the ancient architectural complex of the Labrang Monastery. Based on the maps and results of repeated argumentation, the overall plan of the repair and maintenance work finally was made.

According to the plan, maintenance and repair of cultural relics in the monastery will be undertaken in the principle of "keeping the way it was." Minimum artificial intervention and maximum reservation of the original components, technique, and making are to be achieved.

According to Zhang, the protection work will provide lamas at the Labrang Monastery with a better environment to study Buddhism, and the monastery will continue to exert its role of maintaining religious harmony and political stability.

The provincial and prefectural governments have always been attaching great importance to the protection of Tibetan folk culture and cultural relics and sites.

Zhang Yongsheng revealed that in this year the prefectural government plans to put 300,000 yuan RMB to launch an investigation to get an overall understanding of the ethnic culture, folk arts, cultural relics and sites within the prefecture. The investigation will start in April at latest.