DHARAMSALA, India -- Lobsang Gyatso and his fellow Tibetan monks had been biding their time, walking around the main square of the monastery nestled in the barren hills of northwestern China. Now the moment had arrived. 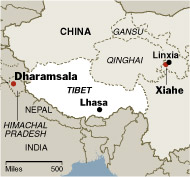 As a group of 20 foreign and Chinese journalists climbed out of minivans, Lobsang and the other monks unfurled banners they had wrapped inside the folds of their crimson robes and held aloft the banned flag of Tibet.

“We have no human rights now,” one monk told reporters in Chinese.

That daring protest, in April 2008, was transmitted around the world by the journalists on the government tour, putting a dramatic face on Tibetan defiance. Chinese officials had brought the journalists to the sprawling Labrang Monastery, in the town of Xiahe to show that Tibetans were content under Chinese rule, despite the widespread Tibetan uprising the previous month. The enraged monks, about 15 in all, punctured the official narrative.

“If we monks hadn’t seized the opportunity to express our feelings, which are feelings in all Tibetan monks, then we would have missed a chance to tell the world,” said Lobsang, 24, a squat man with a thin goatee who now lives in India. Following Tibetan custom, he goes by his given name.

The journalists left later that afternoon without knowing the names or the fates of the protesters. Some would be arrested and beaten, Lobsang said. For him and two other monks, it was the start of a harrowing year of flight from the Chinese authorities that ended only last month, when they arrived in this Himalayan hill town where the Dalai Lama lives in exile.

Over that year, the monks slipped out of their monastery, trekked into the mountains, slept in nomads’ tents, sneaked into Lhasa aboard a high-altitude train and crossed a raging river to Nepal. It was only here in a refugee center that they could tell their tale to a reporter, opening a rare window into the deep-rooted resentment that bloomed last year into the largest Tibetan uprising in decades.

Chinese officials insist that the protests were orchestrated by the Dalai Lama, the spiritual leader of the Tibetans. The monks from Labrang say harsh Chinese policies sparked the tinder, especially limitations on Buddhist practice.

“I and my friends decided on our own to protest,” Lobsang said. “The protests were caused by human rights issues and Chinese policies toward Tibet. We couldn’t tolerate it anymore.”

He added, “I joined the protests with the idea of saving Buddhism, which is endangered by Chinese policy. I want His Holiness the Dalai Lama to return to Tibet, but the Chinese don’t even allow us to display his picture.”

Labrang Monastery is one of the most important centers of religious study in the Tibetan world, a white-walled labyrinth of monks’ cells and temples dating from the 18th century. It housed about 500 monks before last year’s protests. Chinese policies in this frontier land called Amdo, at the nexus of the Tibetan, Hui Muslim and Han Chinese worlds, have traditionally been less strict than in central Tibet.

But even there, the Communist Party employs heavy-handed methods to control religious practice, said the three monks and two others who fled with them to Dharamsala.

The government limits the number of monks allowed to live in the monastery, they said. Officials cracked down on festivities honoring the Dalai Lama. When the Chinese-appointed Panchen Lama visited Labrang several years ago, monks were forced to stay indoors to prevent disturbances.

Thousands of monks and lay people in Xiahe marched to government offices demanding the return of the Dalai Lama. Some protesters broke into buildings and threw stones at riot police officers.

From then on, the government tightened the screws on the monastery, the monks said. A curfew was imposed. Security officers arrested several monks each night. The monastery began to empty out.

“Some monks ran off to their homes in the countryside,” said Jamyang Jinpa, 24.

The authorities began holding daily hourlong patriotic education classes, in which the monks were forced to read tracts denouncing the Dalai Lama and pledge loyalty to the Communist Party.

“As a Buddhist monk who believes in the Dalai Lama as our foundation, it was unbearable to read this,” Lobsang said.

On the night of April 8, some monks heard on the radio that foreign journalists were to arrive in Labrang the next day on a government tour.

“We immediately stopped what we were doing that night and started discussing the protest,” Jamyang said.

A half-dozen monks brought out a Tibetan flag and scrawled slogans on three white banners. “We have no freedom of speech,” read one. They wrote their wills on the back of the flag because they thought there was a good chance they would be killed by Chinese security forces, Jamyang said.

When they went to the main temple the next morning, they were struck by a strange sight: Hundreds of people were milling about the square outside. Most were plainclothes Chinese security officers.

“We knew then that the journalists were coming,” Jamyang said. “We pretended to visit the temple.”

When the journalists and their government escorts pulled up in minivans, the monks dashed across the square, unfurling their flag and banners. A few words were exchanged in Chinese. Some monks draped white ceremonial scarves around the necks of several journalists.

“The Chinese people in plainclothes took photos of us, but they dared not stop us in front of the journalists,” Jamyang said.

That night, security officers searched the cells of the monks involved in the protest, but the monks had hidden elsewhere. The next night, Jamyang slipped into the mountains and kept walking until dawn.

“After the protest, I felt I would be arrested at any time,” he said.

Jamyang spent the first two months mostly sleeping outdoors, he said, sometimes in ditches that he had dug himself. He tossed away his red robes and began growing out his hair. In the summer, he wandered to the high pastures and slept in the tents of nomads.

“In my dreams, sometimes I would see myself getting shot and dying,” he said.

Two other monks from the protest, Lobsang and Jigme Gyatso, also fled the monastery in the days after Jamyang left. The three stayed apart. After nearly a year in hiding, the monks learned of a guide in Lhasa who could smuggle them into Nepal.

Using fake identification cards, they boarded the new high-altitude train to Lhasa. A driver then sneaked them past checkpoints to the Nepal border, where they crossed a river on logs.

Of the 15 monks who took part in that protest in front of the journalists, only these three have escaped to India. That they made it here is considered extraordinary given how tightly Chinese authorities clamped down on Tibet. The refugee center here usually gets 2,500 to 3,000 Tibetans per year, but that dropped to 550 last year. By the end of May, only 176 refugees had arrived, said Ngawang Norbu, the center’s director.

The monks say they have no regrets about holding the protest — to them, there was no other way to show the world their true feelings about Chinese rule.

“I miss my friends and family in Tibet, but I try to bury my feelings,” Jamyang said. “At the moment, I can’t return to Tibet, and I don’t know about the future.”