TAIYUAN, China -- A sacred mountain in China that has been witness to centuries of Buddhist history was added Friday to UNESCO's World Heritage List during the 33rd session of the World Heritage Committee in Seville, Spain. 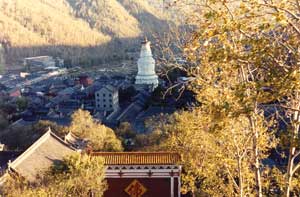 The new addition to the heritage list is Mt. Wutai ("five terrace mountain"), comprised of five continuous mountains with flat peaks at altitudes of 2,500 to 3,000 meters above sea level.

The site is in Wutai County, Xinzhou City in Shanxi Province, 230 kilometers from the provincial capital, Taiyuan City.

"Overall, the buildings on the site present a catalogue of the way Buddhist architecture developed and influenced palace building in China over more than a millennium," it said.

"The success is a new burden that will spur us to better protect the mountain. I feel the pressure," said Liang Yousheng, director of the Mt. Wutai Administration Bureau. Liang said he was delighted to hear the news of the UNESCO decision.

Buddhist temples on the mountain were built between the 1st century AD and the early 20th century.

Numerous Buddhist constructions, including 68 temples, 150 towers, 146,000 sculptures and many frescoes and tablet inscriptions, were preserved during thousands of years on Mt. Wutai, which witnessed the development of Buddhism in China, Liang told Xinhua.

The mountain, the highest in northern China, had been entwined with Buddhism for more than 1,600 years and appeared in many Buddhist books, Liang said.

Mt. Wutai receives more than 3 million tourists annually, and the UN designation is expected to push that number higher.