A nun who has adopted 26 abandoned children in 8 years

Beijing, China -- After graduating from Tsinghua University, Zhihong became a nun. Since 2001, she has adopted a total of 26 abandoned children, and over 20 of them are either currently studying or have graduated from Buddhism programs at various colleges in China. 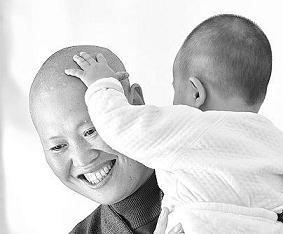 << Master Zhihong named the baby girl abandoned at the nunnery gate Yuanyuan. She is now 9-months old and is starting to learn to walk.

Before she became a nun, Master Zhihong was a student in the Department of Philosophy in Tsinghua University. Because she didn't find "the answer she needed in philosophy," she devoted herself to religion and to Buddhism after graduation. Because Zhongnan Mountain in Shaanxi Province is the birthplace of Buddhism's Vinaya School, she went there many times as a teacher at the Putuo Mountain College of Buddhism.

Master Zhihong stayed in a small nunnery at the foot of Qinling Mountains when she went to Shaanxi. On a night in the spring of 2001, she heard someone crying. Following the sounds of crying, Master Zhihong saw a little girl who was weeping at the nunnery gate.

The little girl was not tall, between 6 and 9 years old, and she was not able to give some basic information about who she was. Master Zhihong brought the girl into the nunnery and settled her down, but after a long time, none of the girl's family members came for her. Master Zhihong found that the little girl was seriously ill, and then she realized that the child had been abandoned by her parents.

During the days when they lived together, the little girl became very close to Master Zhihong. Soon after, however, Master Zhihong had to return to the South, and the child, who had no one to rely on, had to go along with her. She gave the little girl a Buddhist name – Dedao (which literally translates to virtue and Tao). As no one knew Dedao's true age, Master Zhihong took a memorial day in Buddhism as Dedao's birthday.

Currently, Dedao is completing her postgraduate education at a college of Buddhism in China, concentrating her studies on Buddhism.