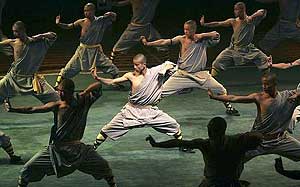 The front of the Shaolin temple - birthplace of kung fu - has also been used in recent years as the backdrop to an open-entry kung fu competition and a beauty pageant.

The front of the Shaolin temple has also been used in recent years as the backdrop to an open-entry kung fu competition and a beauty pageant.

A joint venture between Dengfeng, the city where the ancient Buddhist temple is located, and the state-run China Travel Service (CTS) will be listed in either Hong Kong or Shanghai in 2011.

CTS (Dengfeng) Songshan Shaolin Cultural Tourist Company Ltd will have the temple's annual ticket sales of 150m yuan as part of its revenues. However, a government source said that the temple's buildings would not be included in the new company.

More than 1.6 million tourists visited the site in Henan province last year in order to visit its prayer halls and see the temple's monks perform their kungfu show. The Shaolin Temple also performs a stage show that has toured London and New York.

According to legend, the destruction of the temple by its enemies in the 17th century helped to spread martial arts across China as five fugitive monks carried their kung fu with them.

"The joint venture will promote tourism in the region," said the government source. "But the assets of the temple itself, and its cultural heritage, will not be part of the group," he added.

CTS is expected to take a 51pc stake in the venture after contributing a cash investment. A spokesman for the travel agency said he could not comment on the deal. According to the Oriental Morning Post newspaper in Shanghai, the two sides signed a draft agreement on October 21 and Dengfeng city has agreed to inject 6m yuan into the venture.

The IPO will do little to help the public image of Shi Yongxin, the 44-year-old abbot who has presided over the monastery for a decade, transforming it into a global brand.

Mr Shi's critics claim that he has allowed one of the cradles of Zen Buddhism to become crassly commercial.

Last year, Mr Shi began to franchise out his operation, taking over the management of a number of temples in Yunnan. Rumours suggest that Shaolin also has its eyes on a site in Taiwan.

The front of the Shaolin temple has also been used in recent years as the backdrop to an open-entry kungfu competition and a swimsuit-clad beauty pageant.

Defenders of Mr Shi, who has become known as the "CEO monk" in China, say that the temple was run-down and derelict before he took over, after the suppressions of the Cultural Revolution.

Mr Shi himself has said he is "not a businessman" and that he doesn't "hold shares" in the temple.