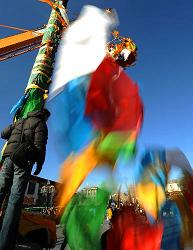 Lots of Buddhist believers write down their New Year - or Losar - wishes on prayer streamers and tie them up to the five Buddhist scripture poles of the temple during a traditional ceremony to celebrate the New Year of the traditional Tibetan calendar, which falls on Feb. 14 this year.

The celebration of Losar predates Buddhism in Tibet and can be traced back to the pre-Buddhist Bön period. In this early Bön tradition, every winter a spiritual ceremony was held, in which people offered large quantities of incense to appease the local spirits, deities and 'protectors' (Tibetan: chos skyong; Sanskrit: dharmapalas).

This religious festival later evolved into an annual Buddhist festival which is believed to have originated during the reign of Pude Gungyal, the ninth King of Tibet. The festival is said to have begun when an old woman named Belma introduced the measurement of time based on the phases of the moon.

This festival took place during the flowering of the apricot trees of the Lhokha Yarla Shampo region in autumn, and it may have been the first celebration of what has become the traditional farmers' festival. It was during this period that the arts of cultivation, irrigation, refining iron from ore and building bridges were first introduced in Tibet.

The ceremonies which were instituted to celebrate these new capabilities can be recognized as precursors of the Losar festival. Later when the rudiments of astrology, based on the five elements, were introduced in Tibet, this farmer's festival became what we now call the Losar or New Year's festival.