Yunnan, China -- Some among New Mandala readers and contributors may recall two earlier posts concerning a new temple built in Jinghong City (the capital of the Xishuangbanna [Sipsongpanna] Dai Autonomous Prefecture, in Yunnan Province, People´s Republic of China), and managed by a property development company from the north of the country. 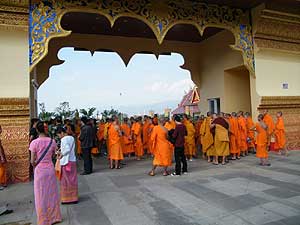 These posts were written firstly by myself (December 2007) and then by Tom Borchert (July 2009). In our contributions both Tom and I called attention towards potential problems related to the allegedly conflicting ends of this co-managed enterprise. Here is an update on the situation almost three years after the opening of Wat Luang Muang Lue — and two years after the Buddhist Institute moved to the complex.

During the last two years, a fundamental point of friction between the company managing the temple and the monks has been access to the temple: the initial agreement between the company and the Xishuangbanna Buddhist Association (XBA) stated that local Tai Lue (“Dai” in Chinese) would have free access to the complex — provided they identified themselves as such with the help of their ID cards.

However, the slow flow of income from tourist exploitation seems to have put pressure on the company (and, consequently, on other companies subcontracted to manage different activities within the site), which early on decided to charge a fee to Tai visitors as well as to outsiders: at present, every local Tai Lue wishing to enter Wat Luang has to pay two RMB as “insurance” fee, while those without ID cards must pay ten RMB (around 0.3 and 1.5 US Dollars, respectively).

The tension created by this decision has occasionally turned into open conflict: last December, for instance, monks and novices working or studying at the Buddhist Institute blocked the main entrance gates, preventing tourists from entering the site for around an hour, after a group of Lue who refused to pay the ten RMB entrance fee were denied access to the complex. There have been several more incidents like this; in retaliation, company managers are said to have occasionally cut the electricity and water supply within the school compound.

Several of the different commercial companies working within Wat Luang have also been accused of resorting to illicit practices to help recoup the investment. Soon after the moving of the Buddhist Institute to Wat Luang, the XBA denounced to the local Bureau of Ethnic and Religious Affairs the presence in the main ordination hall (viharn) of temple staff demanding large donations from visitors, donations supposed to provide for the maintenance of the monks and novices living in the temple, but which never reached them. According to the monks, these practices had expanded to the shops operating within the compound, and which allegedly cheated tourists over the price of Buddhist paraphernalia. The monks have sought to curtail such activities by increasing their own presence in the viharn, as well as in the shopping areas, even organizing ‘patrols’ of novices with the aim of uncovering irregularities. 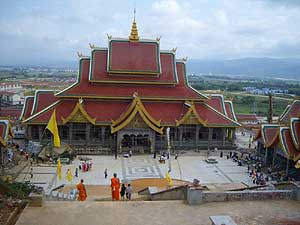 The XBA has also forwarded several reports to the Bureau of Ethnic and Religious Affairs and the Prefectural Government, complaining about the situation within Wat Luang — to no avail. At the end of March this year, and after a communal, three-day-long religious ceremony aimed at relieving the severe drought that Yunnan Province was suffering at the time, more than 500 monks sat for two days in the viharn, while members of the XBA displayed banners in the ordination hall demanding that the local government put an end to commercial malpractices within the temple.

After the intervention of one of the vice-heads of the Prefecture, the local government complied with the demands of the monks and asked them to abandon the protest — which they did. Subsequently, local officials issued a document forcing company managers to close Wat Luang for ten days in order to find a solution to the conflict, granting the monks use of an entrance door to the compound to facilitate access of those people related to the Buddhist Institute, such as relatives of the student monks and teachers. Finally, a company specifically accused of malpractice was replaced by another. Of course none of this was broadcast to the public or was even covered by local news agencies.

The conflict seems to continue unabated, and as at the time of writing this, communication between company and school managers is practically non-existent. As the resources of the XBA are too limited to take complete control of Wat Luang, the monks have often expressed their desire that the local government will intervene and take charge of the temple, giving greater control to the Sangha and putting an end to the illicit practices that allegedly continue to take place within the temple. However, due to the amount of the investment (around  350 million RMB, or 52 million US Dollars) this seems unlikely, and conflict will probably erupt again in the near future.