Chongqing, China -- Dazu county lies just 80 km away from bustling Chongqing, but its Buddhist rock carvings and sculptures will take you back more than 800 years. Sun Li reports 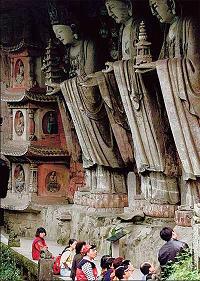 Amid the knobby hills of the county, are 50,000 magnificent Buddhist stone carvings and sculptures, dating back more than 800 years.

Scattered over 40 cliffs around Dazu, one of the best clusters of carvings is to be seen at Baoding Hill.

In autumn, along the road to Baoding Hill, lush terraced rice paddies stand out against the hills.

About the year 1160, Zhao Zhifeng, a famous monk of the Southern Song Dynasty (1127-1279), chose Baoding Hill for its abundant rocks and oversaw the carving of Buddhist images to reflect his teachings of Tantric Buddhism.

It took 70 years to complete the 10,000 carvings, three to 12 meters high, cleft from the rock face in a horseshoe-shaped cliff.

Most stone sculptures are concentrated in Dafowan (Big Buddha Crescent), the center of Baoding Hill. The chief object of veneration is the Thousand-Hand Guanyin (Buddhist Goddess of Mercy) covering some 88 square meters of the eastern cliff of Dafowan.

According to Buddhist lore, Guanyin was the third daughter of an ancient Indian king who fell ill and had to be treated with a medicine that called for the use of his daughters' hands and eyes as ingredients. While the two older daughters refused to comply, the younger princess sacrificed hers to cure the king.

The Sakyamuni Buddha rewarded her for her filial piety with a gift of 1,000 hands and eyes.

The nearly eight-meter-tall sculpture which actually has 1,007 arms and sits on a lotus-shaped plinth, is believed to embody boundless compassion.

I was struck by the incredible effort the statue must have taken to make. Its 1,007 hands - each with a different gesture and holding a holy object like a scroll - feature an eye in each palm.

Located in a dim and shallow niche, the statue looks like a giant gilded peacock splaying its extravagant feathers.

In the middle of Dafowan, you will see another extraordinary statue, a 31-meter-long reclining Sakyamuni Buddha in Nirvana, or eternal bliss.

Lying on his right side, the Buddha wears a peaceful expression, his eyes half closed. The legs of the Buddha lie buried in the hills, triggering many fancy stories about the statue's precise size.

Nearby are the Bodhisattvas and disciples wearing various facial expressions. Half buried, some have knitted eyebrows, and some pursed lips, while yet others gaze at the Buddha with a contemplative air.

From the Buddha's belly rises a platter piled high with offerings of fruit and lotus flowers. Nine fairy maidens hewn from the cliff face above, are shown blessing the scene with their arms extended in the service of the Buddha.

Near the reclining Buddha is a grotto showing the new-born Sakyamuni bathed by spring water.

According to Buddhist legend, at the time the Buddha was born, nine dragons immediately flew to him, their open mouths forming a spout from which gushed the waters that washed his body.

In reality, what visitors will see is a work of architectural brilliance that allows spring water to be channeled through the carved dragon mouth protruding from the cliff face.

Another place that demonstrates the same clever craftsmanship is Yuanjue (Perfect Enlightenment) Cavern, a rectangular rock shelter in the western part of Dafowan.

Sitting in this six-meter-high, nine-meter-wide and 12-meter-long cavern are statues of 15 Buddhas and a kneeling disciple.

A small skylight above the entrance allows natural light to fall directly on the central statue, giving the cave a theatrical feel.

But later, my guide revealed a secret of the cavern's design that amazed me.

In the rainy season, tourists can hear the sound of falling rain but cannot see where the water is flowing.

It turns out there is a hidden conduit above that allows the water to flow through. And by the east wall of the cavern stands a statue of an old monk holding a gigantic bowl. The rainwater falls into the bowl and then goes through the body of the monk to an underground system.

Unlike other sites with Buddhist stone sculptures, the Dazu tableaus showcase a Buddhism with Confucian influences.

The best example is Sutra on the Importance of Parental Love, a series of statues that underscore the Confucian ideas of family harmony, in the northern part of Dafowan.

There is a statue of a pregnant woman with her hands on her stomach and wearing an agonized look, also a couple holding a baby, oblivious to all worldly concerns.

Such scenes of harmony and contentment can be found everywhere in the Dazu Rock Carvings and help visitors temporarily forget their worldly cares and experience true inner peace.