ULAN BATOR, Mongolia -- Thousands of people showed up at the monastery for the Dalai Lama's first public appearance on his visit to the Mongolian capital. 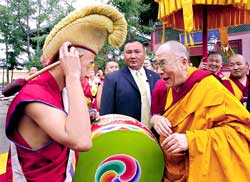 << Thousands of Mongolians flocked to a monastery in Ulan Bator yesterday to welcome the Dalai Lama, as China protested over the Tibetan spiritual leader's visit. PHOTO: AP

Several thousand cheered loudly as the Dalai Lama -- wearing traditional saffron and maroon robes -- smiled and waved to them in the grounds of the country's biggest monastery Gandantegcheling at around midday.

After he went inside the monastery to have lunch with the monks and to later give a religious lecture, worshippers flocked to the big wooden chair where he had sat and touched it to try to receive blessings.

In an address to the crowd at Gandantegcheling, the Dalai Lama stressed the importance of traditional family values.

"These are the values that sustain us through difficult times of change," he said, seated on a cushioned throne before the white-washed brick main temple hall.

The visit is the 1989 Nobel peace prize winner's seventh to Mongolia, a majority Buddhist country that has deep historic and religious ties with Tibet, and it sparked an angry reaction from China.

"The Dalai Lama is not merely a religious figure, but a political exile who over a lengthy period has engaged in splittist activities and hurt national unity," the foreign ministry said in a statement.

"China is resolutely opposed to any country offering him a stage to engage in the above-mentioned activities," the ministry said.

The faxed statement was in response to a request for comment on the Dalai Lama's visit to Mongolia, which began late on Monday and is expected to last one week.

Although there were no officially announced protest actions by Beijing yesterday, aside from the foreign ministry's statement, an Air China flight to Ulan Bator scheduled to depart in the morning was delayed.

An employee at the national flag carrier's customer service office in Beijing insisted the delay -- the 8:30am flight was pushed back until 7pm -- was due to bad weather in Ulan Bator.

However the weather in Ulan Bator was fine and sunny.

The Dalai Lama's office in Dharamsala, India, where he lives in exile, maintained yesterday that his visit to Mongolia was purely religious.

"There is no political agenda to this visit. He's a Buddhist. He's going to give Buddhist teachings. The Chinese are welcome to come to Mongolia and look at the visit themselves," said Tenzin Takla, a spokesman for the office.

The main purpose of the visit was "the promotion of human values and the promotion of religious harmony," Takla said, adding that Mongolians had a "long, special relationship" with Tibetans.

The Mongolian foreign affairs ministry also insisted the Dalai Lama had a right to visit and that the trip was a religious one organized by the Gandantegcheling monastery, not the government.

"The Dalai Lama visited Mongolia several times before through religious channels and was only involved in religious activities," a statement said.