Faith is returning to Mongolia after decades of Soviet repression, and with it reconstructed monasteries

EG UUR, Mongolia -- On the banks of the remote Uur River in northern Mongolia, the Dayan Derkh monastery stands as a testament to Mongolia's religious revival. 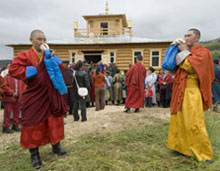 This was one of hundreds of Buddhist monasteries destroyed in the 1930s as the Soviet Union brought Mongolia under its control and effectively banned Buddhism here. For decades, Mongolians had to restrict their faith to secret meetings and their gers – the traditional Mongolian felt tent homes.

Since its return to democracy, Mongolia has rediscovered its strong religious heritage and its Buddhist followers are free to attend the scores of ancient monasteries that have been restored across this vast and nomadic nation.

The rebuilding of the Dayan Derkh monastery was completed in 2006. Since then, it has been looked after by a caretaker called Ragchaa, who grew up in the area and was 12 years old when the original monastery was destroyed in 1938.

"I used to come here and pray as a child," Ragchaa, who like most Mongolians uses only one name, said as he unlocked the wooden door of the lodge-style monastery to let a visitor in. "I remember when the monks who worked here were rounded up and executed."

Dressed in a deel, the traditional robe worn by Mongolian men and women, the old caretaker entered slowly, shuffling clockwise around the one-room hall, as is Mongolian custom upon entering any building.

Passing a faded calendar of the Dalai Lama hanging on the wall, Ragchaa stopped at the main altar to light a stick of incense, before solemnly clasping his hands together in front of a statue of Dayan Derkh, whom Ragchaa referred to as the monastery's 13th-century patron saint. He turned to survey the hall. A dozen or so wooden benches stood scattered around; tapestries of religious figures hung from the ceiling.

"The original monastery was much bigger," Ragchaa said. "But this is a beautiful place."

The full truth about the persecution of Mongolia's Buddhists will probably never be known, but mass graves uncovered in recent years illuminate the grim fate that befell thousands of monks in the Soviet-inspired purges, which lasted until the 1960s.

Norov, 83, who lives downstream from the Dayan Derkh monastery, recalled how her uncle, a monk, managed to flee from would-be killers on horseback. But he was never seen again, she said.

"People used to hide prayer wheels and religious texts in their homes and practice their faith in secret," she said. "We don't have to do that anymore."

There are now 200 Buddhist monasteries in Mongolia, with several more under construction.

But the Dayan Derkh monastery is still not operating as planned. For one, there are no monks trained and ready to move in yet.

Hundreds of kilometers away, at the Gandantegchinleng monastery in Mongolia's capital, Ulaanbaatar, young boys immersed themselves in Buddhist teachings, preparing for moves to monasteries across Mongolia. Among them were six young lamas-to-be being groomed to take over the Dayan Derkh monastery. The oldest, 26-year-old Tseren-ochir, studies at Gandantegchinleng’s associated University of Buddhism.

Another of the students bound for Dayan Derkh is Batkhuu, an orphan who said he was inspired to join the church by one of his father's relatives.

"He was a lama," said Batkhuu, 15. "I used to come to his house and pretend chanting, even though I didn't really know how to do it."

Lamaism, or Tibetan Buddhism, arrived in the 13th century, around the same time Genghis Kahn began his imperial conquests.

Centuries later, one of Mongolia's leaders, Altan Khan, sanctioned the so-called Yellow Sect of Buddhism and authorized widespread construction of temples, shrines and monasteries. At one point, Mongolia claimed more than 700 temples and 7,000 shrines.

In the 1920s, Mongolia reportedly had 110,000 monks, including children – one-third of the male population. More than 90 percent of Mongols embraced the Lamaist faith, census statistics show. But the campaign of repression, initiated in 1936 by Mongolia's Communist leader Khorloogiin Choibalsan at the behest of Joseph Stalin, led to the destruction of all the temples except a handful kept as museums and the execution of thousands of monks.

During the decades that followed, many Mongolians simply lost their religious traditions, said the deputy head of the Gandantegchinleng monastery, Vice Humble Lama Amgalan.

"People were taught that religion is bad, and because of that many Mongolians had little faith and in fact viewed religion with suspicion," he said over milk tea and dried yoghurt in the prayer room of his apartment in Ulaanbaatar. "But the transmission of Buddhist knowledge is coming back. We now have a lot of young monks and lay people who are knowledgeable about our religion."

There are now 3,000 students training to become monks in Mongolia.

Much of the financial support for the rebuilding of monasteries, meanwhile, has come from Taiwan and other Buddhist countries in Asia.

But the Dayan Derkh monastery was financed by the Tributary Fund, a not-for-profit organization in Montana that has sought to enlist Buddhist leaders in its effort to protect the taimen, the largest salmon in the world, which swims in the Uur River below the monastery. "The lamas bring an ancient cultural tie to nature protection that meets up with modern ecosystem concerns," said David Gilroy, an American graduate student at the University of Wisconsin-Madison who has spent years in Mongolia studying the taimen. He also has worked closely with religious leaders here. "They are trying to regain an active community after 80 years of enforced atheism, and in their effort to do that they can partner with international groups to reconstruct what was lost in the 1930s."

The immediate future of the Dayan Derkh monastery, though, looks slightly less clear. A couple of months after Ragchaa brought his visitor into the reconstructed monastery, the 81-year-old caretaker died.

Gilroy recalled Ragchaa’s contribution to the conservation efforts in an e-mail sent shortly after the old caretaker’s death. “He was the elderly man that consulted on much of the building of the Dayan Derkh monastery and who, in many publications and press interviews, was quoted for his personal memories of the original monastery and the lamas living and teaching there. … I know I will miss his wry sense of humor, his great ‘big fish’ stories, and his rare lack of inhibition to speak honestly about what he thought – maybe something that comes with age.”

----------
Stefan Lovgren is a contributing writer and video producer for National Geographic News in the United States.